Mumbai, Aug 23 (IANS) Bollywood star Sanjay Dutt, freed after 23 nights in Mumbai and Pune prisons, reaffirmed his faith in law and thanked all for support as he addressed fans and media from his Pali Hill home here.

'I have full faith in people and the law of this country. I respect the law and will abide by the law and whatever is the court decision,' Dutt said in a reference to his interim bail granted by the Supreme Court. 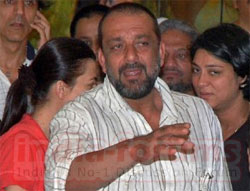 Featured Video
Thanking his fans and friends who had waited for hours outside the Yerawada jail in Pune for three days, the star said: 'I thank them for their tremendous support.

'I also want to thank all my fans, friends and the media for standing by me,' he said from across the main gate of his residence, the Imperial Height building in Pali Hill, amid cheers from fans.

'I love you all, so please pray for me,' said Sanjay, who was accompanied by his sister, Congress MP Priya Dutt.

Sporting a several-day-old stubble and his hair close-cropped, Dutt looked visibly relieved after the homecoming.

He arrived home earlier Thursday to an emotional welcome from his family and friends.

The actor, who stepped out of jail at 7.15 a.m. and took a chartered flight to Mumbai soon after, took most of his fans off guard with his early homecoming.

A large number of fans had been gathering outside his home every day since the apex court granted him interim bail Monday. But only a few were present when he actually got home Thursday.

Wearing a white striped shirt and blue jeans, Dutt, 48, drove into his home in a black sedan at around 8.30 a.m. - just over an hour after gaining freedom.

As the car entered the sprawling residence in the upmarket Pali Hill neighbourhood, family members and friends from the film fraternity rushed out to welcome him home.

After a traditional homecoming puja and breaking of a coconut, Dutt first kissed nephew Siddharth, sister Priya's son, and then hugged both sisters Priya and Namrata.

Brother-in-law Kumar Gaurav had flown with him from Pune where too Dutt's fans failed to see their hero walk of the prison because jail authorities decided to release him early in the morning to avoid huge crowds.

There, after stepping outside Yerawada Jail, a beaming Dutt shook hands with policemen and, overcome with emotion, even hugged a constable.

He then waved to the small media contingent camping outside the prison gates overnight before speeding off in a car to the airport.

Film producer and close family friend Bunty Wallia told IANS from Pali Hill: 'He needs to spend time with his family and rest. He may speak to the media who have extended tremendous support throughout his ordeal.'

Dutt's senior counsel Satish Mane Shinde declined to comment on future legal steps the actor is contemplating. 'Whether Sanju will start working on his unfinished projects will be decided later.

'For now, the most important thing for him is to spend time with his family, which he is doing now.'

Clearly eager to get into his home, the actor told journalists outside his residence that he would speak to them after making a few telephone calls and after catching up with family and friends.

Dutt was sent to jail July 31 after the special TADA (Terrorist and Disruptive Activities) court sentenced him to six years rigorous imprisonment for illegal possession of arms given to him by the accused in the 1993 Mumbai bombings. He was moved to Yerawada Jail in Pune Aug 2.

In Pune, the actor had taken up carpentry as jail labour and even earned a few hundred rupees. He was paid about Rs.20 a day.

Dutt's release may, however, be short-lived because once the TADA court hands over the copy of the judgement of his conviction passed Nov 28, 2006 under the Arms Act, he will have to go back to jail.

But that has not dampened the spirits of his die-hard fans.

'Today's homecoming is a Rakhsha Bandhan (a celebration of brother-sister relationship) gift for his sisters. We are really happy for the family,' said Sampat Bhosle, a fan from Nagpur outside the Dutt residence.

'Whatever little time he has he will want to spend every minute with his family and friends, and I am very happy for our Munnabhai. I have faith in god that he will get through the next (legal) fight,' Bhosle told IANS.

Dutt's interim bail will also bring relief, though temporary, to the producers he had been working for before being jailed.

He has three films on the floors and is expected to be back on the sets soon.

Dutt had started 'Dhamaal' a month before the verdict and had been shooting double shifts to complete the film before going to prison.

Other unfinished projects include Sanjay Gadhvi's 'Kidnap', which has Dutt in the main lead. Shooting for Sanjay Gupta's 'Alibaug', in which Dutt is also co-producer, had to be cancelled after he went to jail.