Ekta Kapoor has ruled TV for nearly 7 years now!!. Ekta is not only the 'Queen of Soaps' but can also be called 'Beauty with Brains'. She has struck a chord with masses, she has the ability to touch the viewers' heart and keep them in a maze with her never-ending soaps.....

Telly Buzz brings you a One-to-One with the Phenomenal Ekta Kapoor..... 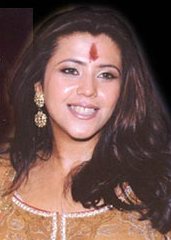 Featured Video
Please comment on the whole, fictional fight that you had with Smriti Irani?


Ekta: I have cleared things out with the paper that published it, but when I first heard about it, I was like - when did that happen? I have no clue. The day the so called “fight” article was published, Smriti called me, and asked me that - ‘when did I fight with you? I am sorry if I had a fight with you, but I really don’t recollect such a happening and I too laughed it off that I have not gone to the sets of Kyunki for over a year and when did all this happen? Hats off to my “well wishers” who spread such news around. Smriti and I met up for dinner after the incident and had a good laugh about it.

Will Smriti ever return to the show?

Ekta: If she wants to then, yes. Smriti has not quit the show, she is just on a medical break, which is completely acceptable to me. Infact, even Gautami said that the day Smriti wants to come back, she will be more than happy to give up the role. She is just playing Tulsi until Smriti comes back.

Do you miss Smriti?

Ekta: Ofcourse, I miss watching Smriti on the show. Come on, she was in the show for seven years, without Smriti, Kyunki is not the same. Gautami is doing a fabulous job, but yes, I do miss Smriti and whenever she wants to come back, I will welcome her with open arms.

Talking about the other characters, when do you actually plan to kill off Baa?

Ekta: Never! (laughter) Baa is going to be the longest living character on Indian television. The channel knows how much trouble we have when we stir things up to kill Baa. Then we drop the idea, but no way, can I think of letting go Baa.

What about the grandmothers on the other shows? Like Prerna’s Mother, Parvati’s mother in law, etc

Ekta: We did plan to end their characters, but then they look up and ask us, if Baa can live why cant we? So again, we just move on with the story.

Recently, the audience wasn’t happy with the way Baa was treated on the show. They find that a little absurd, your comments on that:

Ekta: See, all of this happens in the real world. The older generation is treated poorly. Even when it comes to small things like watching TV, talking on the phone, etc, the younger generation ill treat their grandparents and that is what I am showing on the show. And now if you see the story, the same people, who were not nice to Baa are getting the taste of their own medicine.

Talking about the TRPs of the show, its gone down to a 7 and yet it’s the highest rated show in India. What are your comments on that?

Ekta: When KBC started off with Amitabhji, it hit a TRP of 22 point something and when it started with Shahrukh, it hit a 5 or a 6. Its not that the show wasn’t popular with Shahrukh, its just that at a given moment, out of a X amount of people, 5% of them were watching the show. See, what is a TRP? A TRP is something that at a given time, who watches what. Three years ago, there were lets say, 100 people watching TV and now, there are 1000 people watching. So, now a TRP of 5% of 1000 is bigger than 22% of 100. So that’s where the difference lies. Shows that get TRP of 1 or 2, are not the worst shows, they are attracting a mass in millions. So, we cant really go by the numbers all the time, it’s the audience appreciation that actually matters.

Well, who else can give such a clean explanation to the TRP Game other than Ekta? Wishing Ekta all the very best for her future projects....

taintedangel 15 years ago ummmmmmmmmmmmmmmmm.......... probably smirti doesn't want to come after all she is doinf two serials and 3 would of been too much. If she wants to come back that's fine kyunki will always be her property but you can't force her.

15 years ago we miss her too.
come back smriti,come back.

15 years ago Great article.... Something new about Ekta's view... And I agree with other members, the TRP was confusing, but now cleared. Thanks to Ekta

15 years ago wow, i loved her answers. very clever and very true answers.

15 years ago I agree with ~*Puja*~, I finally understand the TRP game! It was interesting to hear Ekta's thoughts and feelings^-^

15 years ago great interview... i've finally understood the TRP game! i guess only ekta can explain it so well...

Keep up the great work... can't wait for the next interview!

+ 3
15 years ago Nice article.Smriti will always remain as tulsi