Hiten Tejwani who was doing a cameo in NDTV Imagine’s Jassuben Jayantilal Joshi Ki Joint Family has become popular as Ronit. In the last episode of the show, his exit was shown but there are chances of him returning later. 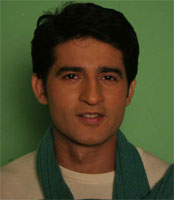 Featured Video
“Yes, there are possibilities of him coming back in the show, but nothing has been decided as yet. We are working on the story track. So let’s see what happens,” says Producer, J. D. Majethia.

Shweta Keswani was also seen as a travel agent for a scene in the episode. “I was there for one scene which marked the exit of Ronit from the show. My character name was Lucky,” says Shweta.

When asked about the chances of her return, she quips, “I don’t know but there are chances. You ask the editor”.

We asked J. D. whether a love story is on cards between Ronit and Lucky. “We are planning certain things, but as I told you nothing is finalized,” concludes the producer.

The blue-eyed boy of Ekta Kapoor played the NRI who comes to meet his friend, and Jassuben was his first venture with Hats Off Productions.

Will Ronit be able to get the love of his life? Is Lucky the girl for Ronit… Let’s wait and watch!!!

13 years ago ya it great to c him back as ronit as his char was too lively n full of fun .....but with gauri he will diff rock this show too

13 years ago my jaan always rocks....bt wiould luv to see him with Gauri in Jasuben.....bcoz my GHT R THE BESTEST:)

13 years ago I want hiten back but wid gauri coz their chemistry is superb.

13 years ago thanks!
awww why cant gauri be opposite of him?! really miss their chemistry! :(

+ 8
13 years ago it was awsome 2 see him n this lighthearted role n would love to have him back in it..but i dont want to see any lucky opposite him..as long as its nt played by gauri i dnt wanna watch t..i jst wanna see gauri hiten unique magic sizzling the small screen once more making all of fall in luv wth this beautiful heavenly jodi all over again

13 years ago I hope to see Gauri opposite if only he comes back. It was such a treat to see him in such a role after a long time.

13 years ago oh plzzzz not any lucky with ronit:(
i want to see Hittu as Ronit with his jaan and our angel Gauri....plz Hittu come back as ronit in jasuben...bt want to see Gauri Tejwani as Ronit''s heroineee:)and my Hittu jaan always rocksss..yeh bhi koi bolne ki baat hain...GHT 4EVERRRRRRRRRRRRRRRRRRRRRR:)

13 years ago hiten was doing great job in this serial n if producers want him back then we want gauri opposite him .....

+ 2
13 years ago if hiten has to be brought back then i want gauri tejwani''s opposite him because hiten is incomplete without her .plus their unbeatable chemistry energize the show.