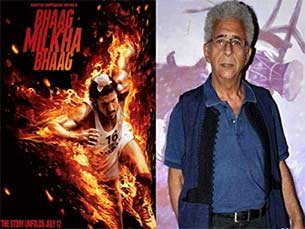 Reacting to Naseeruddin Shah's criticism of Farhan Akhtar's performance in "Bhaag Milkha Bhaag" (BMB) calling it "fake", actress Shabana Azmi and Prasoon Joshi, writer of the film, said the veteran actor is entitled to his opinion but they feel that Farhan was outstanding in the biopic.

Shabana, who is Farhan's stepmother, has worked extensively with Naseer in some of the most influential films of Indian cinema such as "Masoom".

She said: "Farhan was outstanding in 'Bhaag Milkha Bhaag'. His performance gave me gooseflesh. He has raised the bar for what actors should demand from them while portraying real-life characters. Naseer is entitled to his opinion. But most Indians don't agree with him."

While the film's director Rakeysh Omprakash Mehra and Farhan desisted from comment, Prasoon was forthright in expressing his feelings on the issue.

He said: "I respect Naseer saab and he's entitled to his opinion. But I don't agree with his opinion on BMB. I've written the film. It has inspired and connected with people all across the world. It was not meant to be a documentary or a niche film."

BMB chronicled the life of former athlete Milkha Singh and viewers enjoyed watching well-trained Farhan as the Flying Sikh on the big screen so much that it reaped gold at the box office and crossed the Rs.100 crore mark.

Commenting on Naseer's opinion that Farhan doesn't resemble Milkha, Prasoon said: "In my opinion, Farhan has done a great job in terms of the character that I wrote. I had deliberately incorporated tones of fact and fiction. He has shone in his interpretation of the character. There are no false notes at all in his performance."

Pavan Malhotra, who plays Milkha's coach in the film, also stands by the film.

"You can't please everyone. I was and I am very happy to be part of BMB," he said.

When cross-checked, Naseer admitted he was not impressed by BMB.

"But the makers are convinced they've made a masterpiece. Look, spare me, will you? No one involved with that film gives a damn about my opinion. And I am not really keen to hurt their feelings."

However, director Ajay Bahl said he didn't like the film, but appreciates Farhan's acting.

Bahl said: "I didn't like 'Bhaag Milkha Bhaag' at all. I found the film too long. The script went all over the place and the direction was over-indulgent. However, I think Farhan did a splendid job of recreating Milkha Singh's persona. The film just didn't match his performance."

exclusive
Exclusive Bigg Boss 14: Sakshi Chopra decides to give the show a miss ...
17 minutes ago

Sushant Singh Rajput case: NO clean chit given to Bollywood ...
47 minutes ago