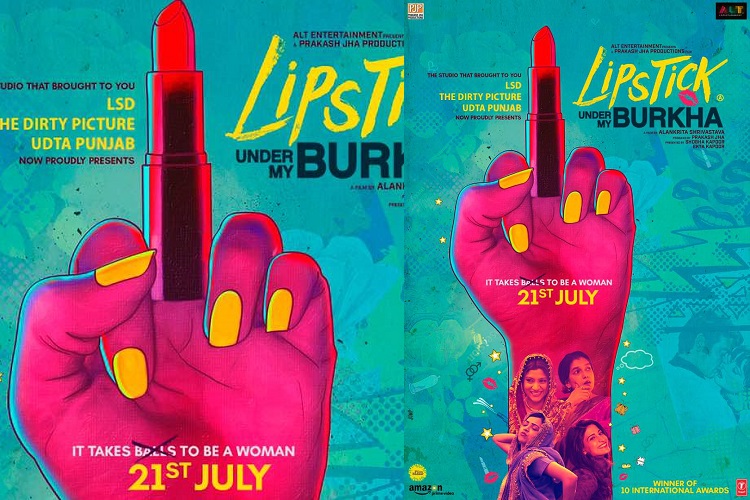 There are movies that are made with the intent to entertain, to make you laugh, cry, whistle and more. And then there are movies like "Lipstick Under my Burkha", that pepper all of these with a dash of rebellion. Taking on the 'crazies' who think they're the guardians of women.
Movies like "Lipstick Under My Burkha" are rare phenomenons, so rare that they deserve more than the accolades bestowed on it, they deserve to be shown to the world with no discrimination on community, gender, age or social strata.
To all the women who're constantly being told what to do, where to go, how to be - here's an answer. "It takes balls to be a woman. NOT! Women cannot be defined by male paradigms. And to all the men who are man enough to let women be... Lipstick celebrates that very spirit."
Ekta Kapoor, who is presenting the project, put up a very bold and powerful message as she unveiled the film's poster.
Here's what she says: "It takes 'balls' to b a woman! ...aaah NOT????! The way to combat good old patriarchy ... is to question it in d face !!! #lipstickundermyburkha 21july in the theatres!!"

After a 6 month battle with the censor board, after sweeping 10 awards internationally, Lipstick Under My Burkha finally hits theaters on 21st July!
The film 'they' didn't want you to watch. 'They' called it - 'audio pornography', 'sexually contagious' and deemed it 'too lady oriented'. While the chuckles from this haven't died down, neither will our voices.
From the studio that presented LSD, The Dirty Picture and Udta Punjab, Ekta Kapoor now presents "Lipstick Under My Burkha" . Produced by Prakash Jha, directed by Alankrita Shrivastava, the film will release on July 21, 2017.
The cast of the film comprises of, Konkona Sensharma, Ratna Pathak Shah, Aahana Kumra, Plabita Borthakur.
About Lipstick Under My Burkha: Set in the crowded lanes of small town India, Lipstick Under My Burkha chronicles the secret lives of four feisty women chasing a little piece of freedom. Though stifled and trapped in their worlds, these four women claim their desires through small acts of courage and stealthy rebellion.
0 Likes

Ekta Kapoor Reacts Strongly to the Case Filed Against her with Regards ...

sky_fighter 3 years ago I don't get it. The logic behind the title of this film is outrageous, why is There need to drag burkha or niqaaab with such shitty movies. No I haven't seen it but I can gather that It is going to be all about sex and what not, my question to Ekta is this only. You want to promote feminism go for it you want freedom for women okay sure I'm with you but when do u have to take down burkha with it. I'm a working woman and I wear niqaaab so no burkha and niqaaab is not always the sign of oppression. Yeah in India it has become a sign of prostitution of you are wearing naqab and standing on the road at around 8 you are most definitely a prostitute of some sort and people would stop their bikes or cars to call on you with such horrible mentality why are you defaming this beautiful thing even more why does the lipstick has to be under the burkha why cant it be under a bikini what the hell are you trying to portray here that only sexually liberated women are free and all other a oppressed that being a prostitute is the best possible solution for a woman all your other films glorify such women what is your agenda