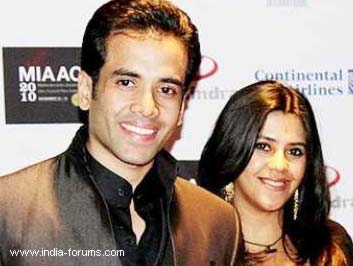 FebYesteryear star Jeetendra is proud of his daughter Ekta Kapoor, one of the most successful producers in the film industry, and says she personifies passion and hard work. He says now he wants her to settle down.

"Ekta is a product of passion and hard work. She has tremendous amount of capacity to work hard, which I don't see in others," Jeetendra told IANS.

"I come from a middle-class family. I had to work hard, but Ekta didn't have to struggle. But she still struggled because she had the passion. She could have taken life lightly, but she didn't choose that path. I feel if you have talent, then nobody can stop you," added the 69-year-old.

He was speaking on the sidelines of "Chaar Din Ki Chandni" music launch.

Like every other father, Jeetendra too wants his daughter to settle down.

"Everybody pray with me for that. Once Ekta gets mentally free, she can think about it (marriage), which every dad wishes for," said Jeetendra.

Rishi Kapoor and Sridevi launched the music of the film along with the cast.

Jeetendra is sparing no effort to promote his son Tusshar's film.

"No matter how much you push, you don't get anything. Every person comes with his own fate, hard work and talent and he achieves only with that. We have to be very happy with what god gives us," he said.

Saying Goodbye To 'Keeping Up With the Kardarshians' - ...
40 minutes ago