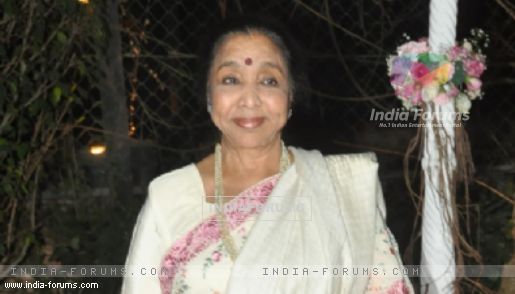 Fondly recalling memories of recording classics with late husband and noted composer Rahul Dev Burman, evergreen singer Asha Bhosle Monday said she is not fond of current songs as they largely cater to masses who prefer rhythm over melody.

"So there is no question of melody... any song that is rhythmic is preferred," she told reporters here at the launch of the Bengal music album "Pancham Tumi Kothay".

Launched by Saregama, the album is a bouquet of eight songs selected by Asha, which were originally sung by Burman, affectionately called Pancham da.

The songs have been re-recorded by Asha in Bengali and is pegged as a Durga puja special.

"The love for Pancham still exists among people here in Bengal and therefore they love me as well. I am the daughter-in-law," said the artist who recently turned 81.

Asha said she has added her own nuances to Pancham da's songs.

Quizzed by the media on whether comparisons with her elder sister and singing legend Lata Mangeshkar affect her, she promptly replied saying: "What will happen with those comparisons? I don't feel bad. If they say Lata didi is No. 1 and I am No. 2 then it doesn't make a difference to me. There is nothing in numbers. It all depends on the love that I get."