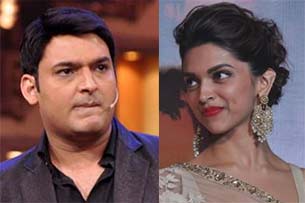 Bollywood actress Deepika Padukone and comedian Kapil Sharma have received Indian of the Year 2013 awards for their contribution to the entertainment industry.

She was honoured for constantly reinventing herself as a leading lady with exceptional acting abilities and for delivering a slew of mega hits in 2013, including "Yeh Jawaani Hai Deewani", "Chennai Express" and "Goliyon Ki Raasleela Ram-Leela".

"I have always done what seemed right to me and my parents supported me all throughout. I never sit and analyse before signing a film if it will be a hit or not, rather just go by my heart. If I like the script, nothing else matters to me. I feel so proud to have received it (Indian of the Year award) from my father," Deepika said in a statement.

The producer and host of "Comedy Nights With Kapil" felt honoured to be awarded amidst eminent personalities. He won CNN-IBN Indian of the Year 2013 - Entertainment.

"It's the year of the common man and I am also one of them. To be awarded amidst such eminent personalities and dignitaries it's a great achievement in itself. I have always believed in working and entertaining the common man and that I think is the success mantra of my life," said Kapil.

He was awarded for creating a successful stand-up comedy show that has universal appeal.