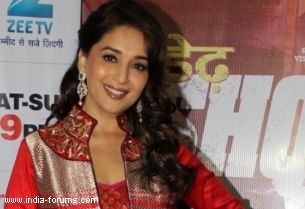 The star-studded premiere of Madhuri Dixit-Naseeruddin Shah starrer "Dedh Ishqiya" in the city was all of a sudden cancelled Friday.

Officials of a multiplex, where the premiere was scheduled, said Chief Minister Akhilesh Yadav and members of his family were scheduled to attend the premiere at a multiplex in Gomtinagar in the evening, but the event has since been cancelled.

He declined to give any details.

Sources, however, said that the chief minister, annoyed by the adverse publicity of the Bollywood Nite at the Saifai Mahotsava where Salman Khan and Madhuri participated, decided not to attend the premiere.

Officials also said that the team of the film, along with director Abhishek Chaubey and other star cast, was informed of the cancellation of the programme when they were about to board a flight at Mumbai for Lucknow.

The red-faced crew aborted the flight and cancelled their travel plans thereafter.

The Akhilesh Yadav government gave a Rs.1 crore subsidy to the film as it was shot 75 percent in the state, entertainment department officials said.

But the negative publicity following the performance of Madhuri at Saifai forced the state government to cancel the film's premiere.

The Saifai glitz has invited sharp rebuke from the media and opposition parties as they accused the Samajwadi Party (SP) government of being insensitive to the plight of the riot survivors of Muzaffarnagar and busying itself in merry making.

"Dedh Ishqia" released Friday and it has opened to rave reviews.