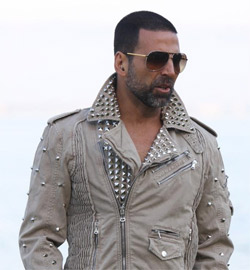 Looking at the new rugged, salt and pepper beard look of action star Akshay Kumar one feels that the actor has been tremendously inspired by Hollywood superstar George Clooney. Styled by a London based designer, the fashion forward line includes unusual hooded jackets, contemporary scarves and trendy ankle length boots. Not to forget his wicked and rugged personal style with his military crew cut, salt-pepper stubble and off course designer aviator glasses that perfectly complements the look. Akshay who would soon be making his debut on television through Khatron Ke Khiladi to be aired on upcoming channel COLOURS shares that his new appearance describes his true self, “I wanted to show all my COLORS through my new style, Akshay’s personal style… I don’t want to look like someone else to be cool; What you see is what I am; from laughs to tears, to dangerous stuff, ladies and cheetah…It’s just me, myself and all my scarves.” Well it would be interesting to see whether the viewers would accept this Indian version of cowboy in their homes.
Featured Video