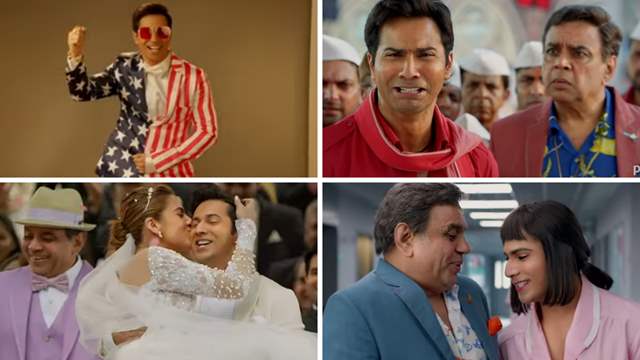 After a long wait, the much awaited trailer of Coolie No 1 starring Varun Dhawan and Sara Ali Khan is finally out.

The trailer is high on entertainment and gives a modern twist to Govinda-Karisma’s 1995 comedy drama. It begins with Paresh Rawal on a lookout for a rich groom for his gorgeous daughter, played by Sara Ali Khan.

Rawal crosses paths with Varun’s character who is nothing else than Richie Rich and is owner of the world's tallest building Burj Khalifa and can also buy the White House in the near future. He also attends conference calls with ATM - Ambani, Trump, Modi. And the next very moment, he spots him at at a railway station as a Coolie.

Varun dons multiple avatars as he juggles life between a rich son to a super rich father and a coolie named Raju. Double role, twins or just a big comedy confusion?

The trailer also gives a feel of the original Govinda film as some of the songs have been reprised including the famous “Main Toh Raste Se Ja Raha Tha”.

Watch the trailer below:

The movie, directed by David Dhawan is a remake of a 1995 comedy drama of the same name starring Govinda and Karisma Kapoor in lead roles.

Earlier, it was scheduled to release on May 1, 2020, but was postponed in the wake of the Coronavirus outburst in the nation. Coolie No 1 releases on December 25, 2020 on Amazon Prime Videos.

lechuarshi 1 months ago Cringe. And another waste product 😣🤢🤢🤢