This week, BollyCurry is putting Kareena Kapoor aka Bebo in the limelight of Celeb in the Spotlight!

Kareena Randhir Kapoor was born in Mumbai on September 21, 1980 to actors Randhir Kapoor and Babita. Born into a family of famous actors, Kareena inspired to become an actress from a very young age. However, her father disapproved of the woman in the family entering the acting profession, despite the family background, thus refraining his 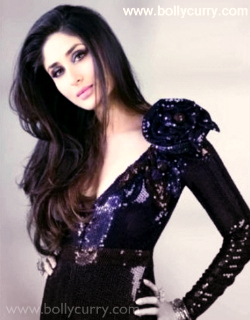 daughters from the big screen as well. Babita, who did not hold the same opinion, left Randhir with her daughters and raised both Karishma and Kareena in Lokhandwala by working multiple jobs.
The trio returned to Mumbai in 1991, allowing Karishma to make her debut in Bollywood. In October 2007, Kareena's parents reconciled where Kareena revealed that her father was always an important person in her life and were now family once again.

Bebo educated to Jamnabai Narsee School in Mumbai and then Welham Girls' Boarding School in Dehradun. After graduating from Welham, she spent two years at Mithibai College in Vile Parle, a college close to the family home. She later on registered for a three month summer course for Microcomputers at the prestigious Harvard University in the United States. Unsatisfied with what she had, she decided to pursue her career in the field of Law by enrolling at Government Law College in Churchgate for a year. Having schooled through many discipline's, Kareena finally realized that the academics were not for her and once again, decided to become an actress. She soon enrolled at an acting institute in Andheri, mentored by Kishore Namit Kapoor.

Originally, Kareena was to make her debut into Bollywood through Rakesh Roshan's Kaho Naa..Pyaar Hai co-starring Hrithik Roshan. However, after a few days of shooting, she later abandoned the project citing that she felt the focus was all on Hrithik. Her debut was then made through the 2000 film Refugee alongside Abhishek Bachchan, a movie which earned her her the Filmfare Best Debut award.

Since then, Kareena has acted in many box office hits such as Kabhi Khushi Kabhie Gham, Mujhse Dosti Karogi, Chameli, Omkara, Jab We Met, Golmaal Returns, Kurbaan, 3 Idiots, We Are Family amongst many others!

As for Kareena's love life, she once dated chocolate boy Shahid Kapur but later went through a very publicized break up. Lately, she been dating Saif Ali Khan where the two have been going pretty steady with marriage on the cards.

Did you know...
BollyCurry wishes Kareena the best of luck with the for her upcoming projects and wishes she settles down soon. Meanwhile, don't forget to watch her upcoming films, Bodyguard and Ra.One!