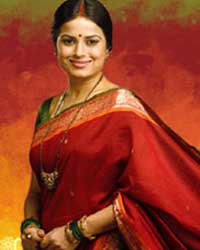 Chitrapama Bannerjee who was last seen in Zee TV's Maa is back to Shakuntalam Telefilms, with Imagine's Devi.

The actress entered the show yesterday, as the mother of the male lead Raj Kunwar (Abhaas Mehta).

Talking about her character, Chitrapama said, "I am playing the mother of the lead. She is a very positive and caring lady who is the bridge between her family members. She is the one who plays the balancing act in the house".

Chitrapama has always given value to the content and character rather than the age that she is playing. "It's the character that matters. I took this show because it was a challenging role. Playing one's age is very easy, but playing a person who is older needs a strong mind. I have a good relationship with Shakuntalam Telefilms".

Chitrapama is also doing a positive character in Sahara One's Kesariya Balam. She is also doing a movie with Raveena Tandon, titled Agni. "I am playing the parallel lead in the movie. It is a film based on a true story and it is completely woman oriented".

Randeep Hooda all set to make his web series debut; Calls it exciting ...

10 years ago thx...
what character is she playing in kesariya balam???

+ 4
10 years ago She was excellent in Maa. I did not understand why did that show end