New Delhi, June 29 (IANS) Akshay Kumar has worked with both Kareena Kapoor and Katrina Kaif in several films, but can't decide who is better. The action king says both are 'wonderful actresses' and have 'sexy bodies'.

'Both Kareena and Katrina are really good but who is the better among them depends on their roles in the films. Otherwise, both of them have sexy bodies and are absolutely wonderful actresses,' said Akshay when asked to choose his favourite of the two.

Akshay has done four films with Katrina including 'Namastey London' and 'Singh Is Kinng', while he has worked with Kareena in five that include hits 'Ajnabee' and 'Aitraaz'. The two are set to scorch the screen once again in their upcoming action-cum-romantic drama 'Kambakkht Ishq', 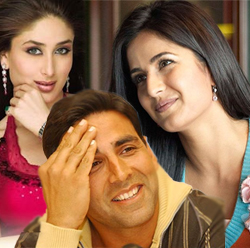 'In 'Kambakkht Ishq', Kareena has performed very well. Her character required to answer back at me and be strong and she has portrayed it in a powerful, yet lovable way. On the other hand, even Katrina was really good in 'Namastey London'. So it's not really about my choice... it all depends on their roles,' the actor told IANS over phone from Puerto Rico in the US, where he is on a holiday.

Akshay, who has spent more than 18 years in the Hindi film industry, says acting with a new league of actresses is a learning experience.

'As a senior actor, I don't always have to give out tips to the younger ones. In fact, I feel I can learn a lot from the younger generation because they have new ways of acting and a different approach to work.

'I cannot particularly point out what I have learnt from them (Kareena and Katrina) yet, but yes, working with them was a learning experience,' said the actor, who has also teamed up with Priyanka Chopra, Deepika Padukone and Ayesha Takia.

Akshay plays a Hollywood stuntman in 'Kambakkht Ishq', which also boasts of big Hollywood names like Sylvester Stallone, Denise Richards and Brandon Routh - working with whom has been a 'dream come true' for the actor.

In the film, Akshay has done what he is best at - action and daredevilry - something that had taken a backseat in his career for a while.

'I decided to stop doing stunts till Aarav (son) turns at least six. Now I'm back at it again. In 'Blue', which is an action thriller, I have done some death-defying stunts like the one where I had to swim 150 feet underwater with 30-40 sharks. But I will talk about it sometime later,' he said.

At the moment, the 41-year-old actor is pinning hopes on Sajid Nadiadwala's 'Kambakkht Ishq' to bail him out after his much-publicised films 'Chandni Chowk To China' and '8X10 Tasveer' fizzled out at the box office.

'I'm expecting great response for this film. Though I had worked very hard in 'Chandni Chowk...' , the response didn't turn out to be as expected. Some people and critics didn't like it and '8X10 Tasveer' was more like an art film, which has a niche market in India. 'Kambakkht Ishq' is a complete entertainer and I hope the audience appreciates it,' he said.