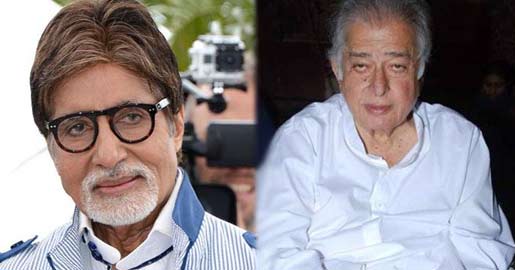 Megastar Amitabh Bachchan has recorded a message as part of a special video to be screened when veteran actor-producer Shashi Kapoor will be conferred the Dadasaheb Phalke Award next month.

Amitabh says he was left speechless when he was asked to narrate his experience of working with Shashi, whom he has starred with in films like "Trishul", "Silsila", "Roti Kapada Aur Makaan", "Kabhi Kabhi" and "Kaala Patthar".

Shashi, 77, was chosen to receive this year's prestigious Dadasaheb Phalke Award for his outstanding contribution to the growth and development of Indian Cinema since the late 1940s. The award will be presented to him next month, but it has been reported that Shashi may not be able to attend the National Film Awards ceremony due to health reasons.

Emotions welled up when one of Shashi's sons asked the 72-year-old to recount the time spent with him. The actor then took to his official blog to share his thoughts about it.

"Shashi Kapoor wins the Dadasaheb Phalke Award by the Government of India, the National highest Award for the Industry by the system.

"We are all honoured by this decision. Shashi ji and I have shared so much it is difficult to imagine how we did it, now, when I look back on it, asked by his son and grandson to fill in a few moments on video for the honour event in the Capital," Big B posted on srbachchan.tumblr.com.

Be it the brotherhood of "Deewar", master-employee relationship in "Namak Halaal" or union of two cons for a cause in "Do Aur Do Paanch", the camaraderie between the stars is not restricted to professional level. The duo share a personal bond as well.

The "Paa" star also noted that there are no words to describe the journey.

"Some thoughts and words tumble out. But nothing can give adequate expression of what we would ideally like to state. There is so much to say and remember," he shared.