View Profile
There are speculations galore about why Shahid Kapur and Kareena Kapoor have parted ways. The logical deduction is that Shahid was doing no good to Kareena's career. Some say the increasing closeness between Kareena and Saif is the cause behind the widening gap between Kareena and Shahid. Others have spotted yet another angle to the story --- Shahid's friendship with "Vivah" coactress Amrita Rao. After debuting with "Ishque Vishque", Shahid has been most successful when paired with Amrita. The audience has accepted the jodi whole-heartedly. 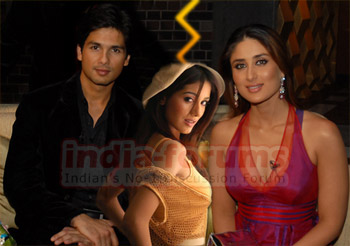 Shahid-Kareena tried their level best to pull off their off-screen magic on screen too with "Fida", "36 China Town" and "Chupke Chupke". But they never made an impact. It is an open secret that it was Kareena who played an important role in fetching Shahid roles. But despite his success individually, could never strike the chemistry with Kareena in their films.

For one, they never tried to hide their four-year love-hate relationship, except for one private moment with was captured on a cell phone. Kareena had then dragged a well-known English daily to court for printing the lip-locked moment with Shahid.

Sources say "Jab We Met" was the nail in the coffin of the relationship. It is believed that things went astray between them in the last three months. Kareena is at a crucial crossroad in her career and just can't afford another flop. It became necessary for her to detach herself from a budding star. Her closeness to Saif Ali Khan during the shooting of "Tashaan" only made things worse. It may surprise many but the piece of news now doing the rounds is that it was Shahid who first pulled the plug. As of now, the two have chosen to stay mum about their personal lives. After all, any public statement could adversely affect the box-office results of their yet-to-be-released "Jab We Met".