Yet again, it seems that Amitabh Bachchan may finally have his backlog film ZAMAANAT hit the screens. In the last 4 years, the film which stars Bachchan as the lead protagonist (he plays a blind lawyer fighting Arshad Warsi's case in the court), came close to release at least 4 times. However, time and again it got stalled.

Now just as one thought that the film had been relegated to the cans for good, the latest news which has arrived is that this film, which is directed by veteran filmmaker S Ramanathan, would eventually hit the screens in the month of September. 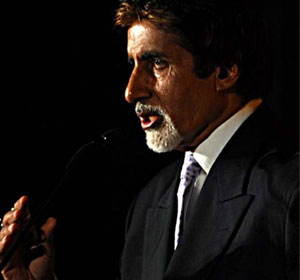 The film's shooting had incidentally kick started way back in the 1996 when Arshad Warsi had just made his debut with Big B's ABCL production TERE MERE SAPNE. At hat time ZAMAANAT had created a casting coup of sorts since it featured then-reigning queen Karisma Kapoor opposite a newcomer Arshad Warsi. Moreover with Bachchan heading the star cast in this action thriller, ZAMAANAT seemed like a winner in the making.

In addition, it was only the second time ever that Bachchan was playing a lawyer after MAHAAN where he had enacted a triple role. However, even though most of the film's shooting had been completed before the start of the 21st century, numerous production hassles resulted in ZAMAANAT being delayed with every passing year.

Eventually sometime in 2006, heat started picking up around the film finally making it to the theaters. Promotion too caught full swing while the release date was announced as well. However, unfortunate as the case was with ZAMAANAT ever since it's shooting had begun, there were last minute hassles which resulted in the film being stuck for the umpteenth time.

Now with September 2008 looking like a possible time period for the film's arrival, one waits to see if ZAMAANAT indeed keeps it's word this time around.