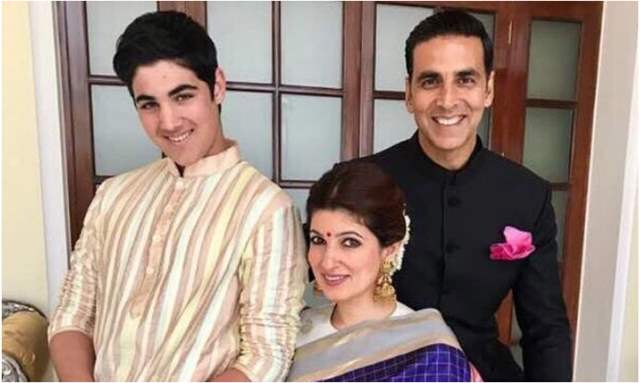 Star kids are often spotted around the town while many like to be papped by the shutterbugs, Akshay Kumar and Twinkle Khanna’s son Aarav avoids getting spotted. He is one of the few star kids who is rarely photographed.

During a recent interview with Mumbai Mirror, Akshay Kumar spoke about the same and revealed the reason he prefers to stay away from all the attention. He also maintained that his son Aarav is not in favour of telling people that he is Akshay Kumar’s son.

Recently, Akshay was seen featuring with survivalist Bear Grylls on his show - Into the Wild with Bear Grylls. The two even had a candid conversation about family and Akki revealed that his son is very different from others and wants to have his own identity away from his father’s.

The Good Newzz actor also shared that Aarav does not like staying in the limelight and that he understands it well and lets his son be the way he wants to be.

Akshay reportedly told Bear about Aarav and said, “My son is very different. He just doesn't want to tell anyone that he's my son. He wants to be away from the limelight. He wants to have his own identity. That's the whole thing and I understand it. So, I let him be the way he wants to. My father was the only influence I have in my life and I've followed all his rules and all the things that he has taught me. And I hope my son gets that.”

On the other hand, Akshay tries to keep his daughter Nitara away from the limelight.

Meanwhile, on the work front, Akshay Kumar recently took off to Scotland for the shoot of his next film ‘Bell Bottom’. He was accompanied on this trip with wife Twinkle Khanna, son Aarav, and daughter Nitara.

The film is based on an espionage thriller plot and features Vaani Kapoor as the leading lady. Directed by Ranjit M Tewari, the film is scheduled to hit the screens on April 2, 2021.