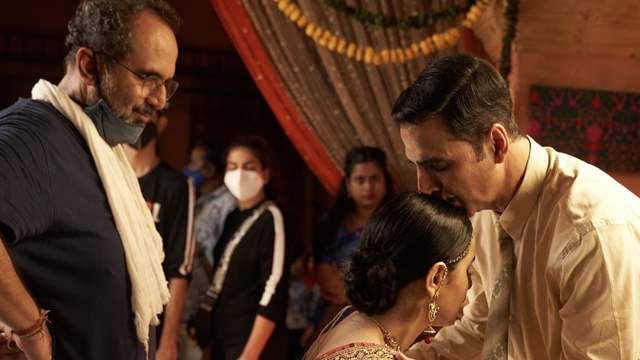 Bollywood actor Akshay Kumar recently made headlines post the revelation of his first look from his next project, Capsule Gill, which happens to be a biopic. The look has received mixed reactions by far by netizens but the excitement amongst his fans for his upcoming release Raksha Bandhan is noteworthy.

Now, the Atrangi Re actor took to his social media handle and shared a slew of behind the scene moments along with a note. Sharing the adorable images on Twitter he wrote,

"A film celebrating the most special bond where there genuinely was a lot of bonding❤️Sharing a few special moments of this very special film, coming to a theatre near you in 1 month. #RakshaBandhan releasing on 11th August in cinemas. 1MonthToRakshaBandhan #RakshaBandhan11August"

Akshay's tweet had some special moments with director Anand L Rai, Bhumi Pednekar, Sadia Khateeb, and his other sisters.

In the film, the Bachchan Paandey actor portrays a devoted elder brother who is willing to marry off his sisters before concentrating on his own life. Aanand L. Rai is the director of the movie, which centers on the issue of dowry.

Akshay also has Mission Cinderella and Ram Setu. He also has the remakes of Soorarai Pottru and OMG 2: Oh My God! and Selfiee alongside Emraan Hashmi.