View Profile
Akshay Kumar has always come across as a suave, charismatic and charming man, but this time, he adds an extra edge to his look in Shree Ashtavinayak Cine Vision Ltd.'s underwater action thriller 'BLUE'. 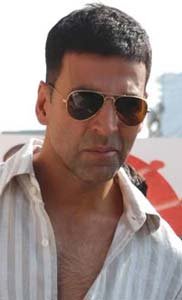 Featured Video
play this role, the director Anthony D'souza & Akshay Kumar sat down to create a look as never played by him before. Anthony envisioned Akshay sporting an edginess which was in tune with his character of a rich businessman who is ruthless and determined once he sets his sight on something.

That's when Akshay suggested that they slash his eyebrows!

Needless to say the director was surprised at this unusual suggestion, but after deliberating over it, he decided to go along with it. And the end result was fabulous!

In the film, audiences will get to see Akshay sporting a slashed eyebrow which lends him a menacing look.

Since Akshay plays a mature character who's been around the block and is very street-smart & savvy, the director decided to do away with the clichd French beards and goatees and instead opted for a very distinctive salt and pepper bearded look.

Playing his age, the cut eyebrows combined with the salt and pepper beard gave him just the right killer touch! A very calculating and shrewd look that added a lot of character to his on-screen persona!

In this day & age where actors are extremely particular about their looks and body, here's one actor who sure doesn't hesitate to go the extra mile to get the perfect touch!