Memories bring a glimpse of the past. It can be either positive or negative and yet serves for the purpose of bringing a better start. Inspired by this concept, BollyCurry has ventured to the past and basked in movies the 70s had to offer, especially ones that really paved a way for a better cinematic future. Read below for a glimpse of movies that not only emerged as Box Office hits, but managed to bring something conceptually different to rejoice on-screen i.e. out of the box.
Mera Naam Joker (1970) 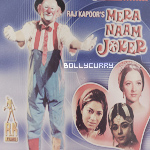 Raj Kapoor's thirst for entertaining cinema, whether its acting or directing, is sheer brilliance and tragic at the same time. Nonetheless, he helped bring Bollywood a name that has made it famous throughout the world today. Today we highlight one of his biggest projects where he nearly spent all his money in bringing this film alive, Mere Naam Joker. The film was initially released in 1970, however, due to its extreme length, it didn't pull in much of a crowd. It was then re-released in 1973 and finally managed to grab a lot more eyeball. The tale revolves around a boy, Raj, who meets three women in his life; his school teacher, an international acrobat and then a struggling actress. It ends on an emotional note where all three women watch his final, pitiful performance. The success of the film went on to win the Filmfare Award for Best Direction as well as several technical awards.
Pakeezah (1972) 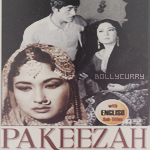 The 70s either portrayed women as fragile creatures, destined to depend on a male, or one with such beauty that glamour and dance was her only route. Pakeezah is one such movie that showcased that a woman's purity lies inside her heart, hence the title. The story revolves around a courtesan, Nargis, who fell in love with a Nawab and both marry, despite the rules of customs and traditions, and in turn is shunned by the Nawab's family. Nargis delivers a girl, Sahibjaan, and dies during childbirth where her sister then takes care of her as her own without informing the Nawab. Sahibjaan soon grows up and falls in love with the nephew of the Nawab, Salim Ahmed Khan. As a test of destiny they both get separated, however, Salim invites her to perform at his wedding which leads to the identification of the her being the Nawab's daughter. The Nawab proceeds by calling her to be Pakeezah - 'pure' pertaining to her heart. Both characters of mother and daughter were elegantly played by the beautiful Meena Kumari who is still remembered today for her grace and fluid character portrayal.
Seeta Aur Geeta (1972) 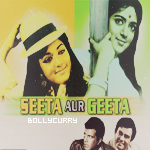 The movie is dominated by the comical concept of twins separated at birth, which was quite popular theme in Bollywood during the era, where Hema Malini was seen in the dual role of Seeta and Geeta. Seeta lives a semi-Cinderella-like story of being tortured by her greedy aunt and aunt's brother for her property. Meanwhile, Geeta is the street acrobatics performer who earns her keep by performing various street acts. Due to unforeseen and quite surreal circumstances, Seeta and Geeta accidentally exchange their places without the knowledge of the other's existence. The film had Dharmendra Singh Deol and Sanjeev Kumar in the lead roles opposite both characters of Hema Malini and was considered to be one of the most hilarious films released in the 70s.
Bobby (1973) 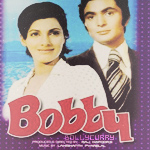 Another movie directed by Raj Kapoor designed to launch his son, Rishi Kapoor, in the Bollywood film circuit, Bobby aimed to deliver the taboo concept of eliminating the gap between the rich and the poor, as well as bring to light the issues of caste and religious boundaries. The teenage romance was an eye-opener to the residents of Bollywood and the world, which focused on the love of Raj Nath, who is born into a rich family and who falls in love with a poor girl, Bobby, born to a fisherman. Bobby returns his love but not without a fair share of trials and tribulations. However, their love ultimately triumphs leading to the elders realizing the love of their children. The film was a dream debut for Dimple Kapadia who went onto star in many other successful projects. On release, Bobby set a trend for many movies to follow, all inspiring to touch controversial concepts.
Deewaar (1975) 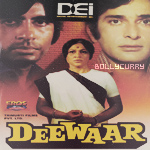 Deewaar was directed by Yash Chopra and subsequently established Amitabh Bachchan as the "reigning superstar of Bollywood". The tale focused on two brothers, Vijay Verma and Ravi Verma. The story begins with Ravi, the younger sibling played by Shashi Kapoor, receiving a police award and then forwards with the story of how his older brother, Bachchan as Vijay, meets an early and bittersweet end due to his obsession with wealth. The movie was a huge hit on release due to a well-executed screenplay along with dialogues penned by Javed Akhtar. The most popular dialogue, "Mere paas maa hai", has become iconic phrase in the Indian film industry and is even uttered amongst the youth of today.
Sholay (1975) 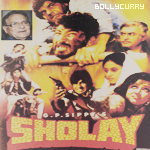 This classic cult movie needs no introduction. Released on the occasion of Independence Day, the film garnered the attention of everyone with its perfect casting, well executed dialogues and absurd storyline which revolved around two buddy thieves who are sent by a Thakur to capture Gabbar Singh, a havoc creating dacoit. Even to this day, Sholay stands proud for its friendship idealization and is a trendsetter for bromantic comedies as well as villainous characters. The movie won many accolades on its release and also won the Filmfare Award for Best Film of 50 Years in 2005, proving how it continues to survive the test of time. The 3D version of the movie was also released earlier this year.
Dharam Veer (1977) 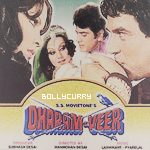 Dharam Veer is another movie of the 70s that explored the theme of two brothers separated at birth, though this time it isn't about twins. This film featured popular stars of the time, Dharmendra Singh Deol and Jeetendra in lead roles. The plot circulated around Meenakshi, a mother, abandoning her eldest son after the insistence of her brother otherwise he would be killed. The elder son, Dharam, grows up in forest while the younger one grows up in the palace as the rightful heir to the throne. Circumstances and destiny reunites the brothers without the revelation of their relationship, however, the truth eventually seeps out and in the end, Dharam kills his uncle.
The above are just a few movies that came to mind when we thought of the 70s. Have we missed your favorite? Let us know in the comments below and we'll be back once again with a bunch of movies of the succeeding decade. Stay tuned!
Writer: Vaishnavi V.
Editor(s): Shreya S. and Jenifer Y.
Graphics: Shikha A.
Do you have a suggestion or comment for BollyCurry? Drop us a PM at BC_Dropbox today!