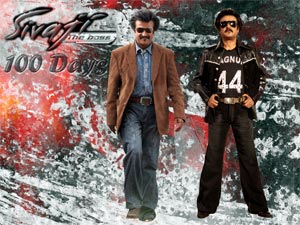 Featured Video
' has completed 100 days but no celebrations marked the occasion because producers say it has many more milestones to cross.

'We have only crossed the half-way mark. Let 'Sivaji' cross still bigger marks. Then we will celebrate!' said S.C. Babu, CEO of AVM Productions, under whose banner the film was made.

The movie was released amid much hype and fanfare, and the suspense was heightened with its release date getting postponed several times.

In the bargain, several small and big films changed their release dates so that their films did not clash with Rajnikant's big movie. But the 'Boss' came only when he was ready.

One big film that really suffered was Suresh Balaji's Ajit-starrer 'Kireedam'. Ajit usually has a release on his birthday May 1. But this year, his 'Kireedam' did not release on the special day. However he did not show any disappointment, as he had no desire to question the 'Boss'.

First came the music of 'Sivaji'. And music from A.R. Rahman crosses all barriers. Even those who didn't know a word of Tamil listened to 'Sivaji: The Boss' and sang 'Vaaji Vaaji ...'.

And when 'Sivaji' arrived in style May 31, there was mass euphoria not only in Tamil Nadu but all over India. It was for the first time that a regional film created such national frenzy.

As there are around 140 digital theatres in Tamil Nadu, for the first time a large number of digital prints were dispatched to all the cinema halls. Digital prints apart, 400 Tamil and 300 Telugu prints were sent to theatres across the world. 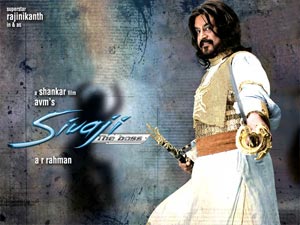 For the first time, a Tamil film had simultaneous releases in the US, Canada, Britain, Singapore, Malaysia, Sri Lanka and Australia.

People stood in serpentine queues across South India to catch the first day first show of the blockbuster, and the film ran to full houses in North Indian cities too.

'Sivaji' is Rajnikant's 100th Tamil film, and the ninth for AVM. All the eight earlier films Rajni did for AVM were huge hits ... And the latest is their biggest ever.

A film completing 100 days is considered a big event as it has become a rarity. Surprisingly, when 'Sivaji' completed 100 days a few days ago, there were no celebrations.

Rajnikant, however, made a trip to the famed Tirupati temple in Andhra Pradesh to thank god for the film's success - he had visited the Lord Venkateswara temple before its release also.

And if one goes by AVM Productions' CEO, celebrations will have to wait until 'Sivaji' completes 200 days!