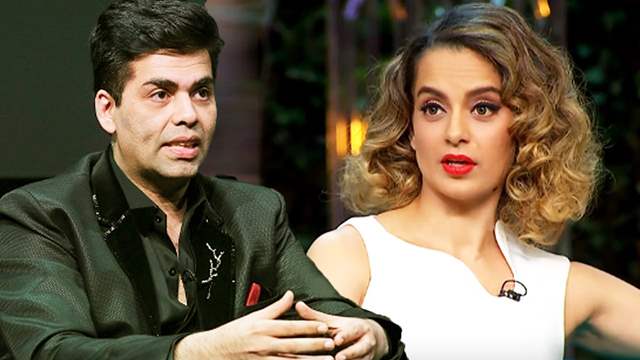 Karan Johar as been under the media scanner since the time he posted his emotional message bidding his last goodbye to Sushant Singh Rajput. Since then, the filmmaker has been receiving a huge backlash on a daily basis from the netizens who have been accusing him for being the flag-bearer of nepotism in the Hindi film industry and for not allowing any outsider to create their niche in Bollywood.

Recently, Kangana Ranaut who has been doing an extensive research on Sushant and finding out all the possible reasons what might have forced him to take the drastic step, shared about her struggling days when she too was terrorized by the Bollywood mafias.

In one of her recent interview she revealed how Karan Johar went on to make fun of her on International platform and attacked her and all the people present there supported his statements and even applauded him.

The same old video is now going viral and social media police have been roasting KJo for his brutal statements.

In the video we can say Karan saying, "I want to say... I want to say I am done with Kangana playing the woman card and the victim card. I mean you cannot be this victim at every given point of time who has this sad story to tell about 'How you have been terrorized by the bad world of the industry'... 'LEAVE IT'... Who is forcing you on a gun point to be here in the movies... LEAVE... Do something else..."

Further, the host, Anupama Chopra tries to explain what she meant, "No... I think, may be... and I am trying to interpret what she meant here, but maybe..."

And before she could complete her point, KJo cuts her off and says, "But all of you only, Chane K Jhaad Pe Daaloge so then this is what will happen."

ChickenSoup 2 months ago @thesheowl101 Yes you’re right SSR was successful but he was kicked out of 7 films right before his death. And being an outsider nowadays isn’t easy in Bollywood. It’s not entirely true that a movie’s success is in viewers hands. If that was the case then Sonchiriya would have made 200 crores and would have won multiple awards. All the nonsensical movies are making the most money. But yes you’re right that Kangana is using SSR’s death as a publicity stunt. She has always been like that. First it was Hrithik’s name and now SSR’s name. She always plays the victim card. Now people just can’t take her seriously anymore.

ChickenSoup 2 months ago I’m just waiting to see the downfall of Karan Johar. This dirty fag needs to leave!

thesheowl101 2 months ago It's so funny how Kangana Ranaut and her loyal supporters are blowing this all out of proportion. A man is dead. Respect him. Don't drag him into your revenge game woman. Oh wait... Sushant Sir has been long forgotten. This is all about her now. #SushantSinghRajput is just used by her PR to keep her relevant these days.

Different12 2 months ago Seriously I some where find this woman and victim card too much. Her works speaks enough about her. She has achieved a lot. Why does this negativity keep going on and on. If you don't like something it's better to ignore and never speak about it and do your own work rather than pointing fingers at ppl. No doubt she is a good actress and does amazing work. But my point is she should just ignore everyone else

Funny29 2 months ago seriously Karan is right if she has a problem with BW why does she work in BW? I mean the so-called BW Queen can also go and try her luck in HW or produce her own movies. Can the woman finally calm down, this reminds me of the things with Hrithik, the woman does not stop annoying