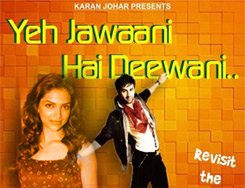 Get set to watch former off-screen lovers Ranbir Kapoor and Deepika Padukone get up close and personal in "Yeh Jawani Hai Deewani", releasing March 29 next year.

Produced by Karan Johar and directed by Ayan Mukerji of "Wake Up Sid" fame, this is the first time Ranbir and Deepika will be seen together in a film after they parted ways.