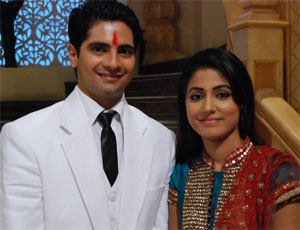 After celebrating 500 episodes with Havan followed by cake cutting, Star Plus and Rajan Shahi's Ye Rishta Kya Kehlata Hain successfully celebrates its 600 episodes. But the plans of celebrations make a wait.

Our source says, "Because of the cut to cut shoot, the unit will not have the celebrations today, but there will be a small cake cutting ceremony tomorrow. And the production house plans to have an elaborate party in early May."

We contacted Rajan Shahi, the producer of the show and told us, "It's a great achievement to have completed 600 episodes and the credit goes to the entire team, starting from the actors, director, writer and the entire technical crew etc."

"TV has gone through a lot of trends and phases in the recent time and I feel happy that Ye Rishta has survived the test of time. We have been consistent and have not compromised any time. The simple story telling, minus the negativity and gimmicks has worked wonders and I thank the loyal audience for accepting the show", adds the producer.

We also contacted Karan Mehra aka Naitik  and he says, " I feel really great that we reached a milestone and it motivates us and gives us a positive feeling to complete more such episodes. It is great people like you who made people love us and also, reporters like you help us to interact with audience."

We contacted Hina Khan aka Akshara who seemed to be unaware about completing 600 episodes and she told us "Who told you this and is it true? Let me confirm."

saritha26 9 years ago love this show soo muchh... congratulations n all the best to all the team... yrkkh rockss...

Its a waste of space n ultra boring.

kingini_aardra 9 years ago yrkkh is my favourite show......y people think it is boring......i think those who think this show as boring like to see negativities........this is the only show which show the family value with a great respect..........good luck yrkkh
y they are commenting so badly....and using bad words...these people are very rude to yrkkh .......y they behave like this they dont have manners or what...............

sexypink 9 years ago I dnt undrstnd y pple comment so ruthless, if u dont lke da serial den dnt wtch it or dnt read its news.. If u dnt hve nythng 2 cmnt den dnt cmnt smthng wrong on da tv stars... If ur fav serial fnshd its nt yrkkh's casts fault nd if u dnt lke da way dey act so talk about their acting.. Tb is a decent way of bringing up news so plz dnt comment so indecent..
@ Naavya1 & ayesha-angel plz dnt comment so ugly da stars have nt dne nythng wrng 2 u dis is their way of mkng money it is their proffesion or should v say carreer nd its nt da fault of hina & karan if their show is heading successfuly also bidaai took 3 years nd i thnk 3 yrs is enough 4 a serial...
Nd navya what is she 2 do wid yrkkh dat u comment so rude. Its nt da serials fault dat replaced tere liye da tme slot dey were given is what dey took.. Plz guys comment in a decent way or dnt coment.. Thnx

Disha Salian did not dial 100 before her death, says Mumbai ...
13 minutes ago

Nishant Malkani: I may not agree with everything Kangana ...
36 minutes ago

What was Ranveer Singh doing at YRF Studio? Close Source ...
43 minutes ago