When Akshay Kumar decided to throw his first party in Bollywood to celebrate the opening collections of his 'Kambakkht Ishq', he made it a point to invite Shah Rukh Khan even though the superstar was far away in San Francisco. 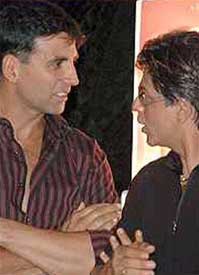 Featured Video
'Yes, I did call Shah Rukh Khan to invite him. When Kareena and I suddenly decided on Sunday evening to have a party, we decided we'd invite the entire industry. This wasn't a party to celebrate our success alone. It was also a party to celebrate the success of 'New York' as much as my own film. So, apart from me and Kareena, the party's unofficial hosts were Katrina (Kaif), John (Abraham) and the entire 'New York' team,' said Akshay.


Akshay has often accused members of the film industry of trying to sabotage his films but he still wanted everyone to come together for the success of two films following a slump.


'I want them to celebrate any success and not be happy when films fail. When 'New York' was released, SMS messages against the film were sent out. The same thing is happening with my film. Why be negative? Specially when I've always been happy for all my colleagues' successes?' Akshay asked.


'So yes, I personally called up Shah Rukh and all my colleagues for the party. But he's shooting in San Francisco...There will be plenty more occasions, I'm sure,' the actor said.

The party hosted at the Marriott Hotel Monday night was Akshay's first ever.


'I completely shy away from parties. But this time I think we all needed to express solidarity and happiness over the end of the prolonged slump,' he said.


The impromptu party was Kareena's idea. 'We quickly drew up a list. She invited her friends. I invited mine. Then we began making the calls. Then there was Tina (wife Twinkle) who called her friends. That just about covered the whole industry,' Akshay added.


And how was the party?

'No drinking for me. But a lot of dancing. It was a lot of fun,' the star said.