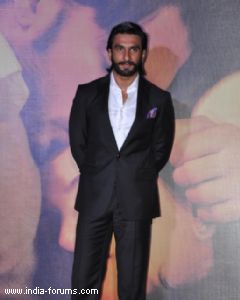 Actor Ranveer Singh, who used to serve coffee at Starbucks in Indiana in the US before he became an actor, says he used to go out of his way to take care of his looks to impress girls who frequented the cafe.

"I used to keep my hair (points to shoulder) that long, (they used to be) all tanned. I used to look distinctive. There were all these hot Jewish girls who used to take coffee to class every morning and they used to be like "Oh my God! the guy behind the counter is so exotic-looking. He's like such a dreamboat," Ranveer said on popular talk show 'Koffee With Karan'.

Not only did he take care of his looks, he used to also speak in an Indian accent to catch their attention.

"I used to purposely put on an Indian accent because they used to find it very appealing. I used to talk like Apu from 'The Simpsons'," added Ranveer, whose last film 'Goliyon Ki Raasleela Ram - Leela' managed to win many hearts.

The actor will be seen on 'Koffee With Karan' on Sunday on Star World.

Aditya Chopra Pens a Heartfelt Note on '50 years of Yash Raj ...
38 minutes ago