Bollywood star Ajay Devgan kept some Chandigarh police officials waiting for over two hours at Taj hotel here. Guess, for what? Wrong, in case you thought for an autograph!

The police officials waited endlessly for the star Wednesday night for Rs.200 -- the fine imposed on him for smoking at the airport in the smoke-free city. 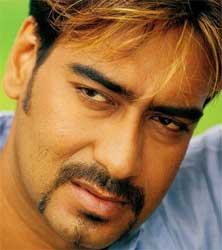 Featured Video
Despite the long wait, the actor did not appear before the police officials, who were waiting in the hotel's lobby.

The fine was imposed after an NGO filed a complaint Tuesday accusing Ajay Devgan of allegedly smoking at the Chandigarh airport Monday.

'I talked to Devgan over the phone and the producer of his film has assured us that they will pay the challan,' Bhupinder Singh, investigating officer, told IANS Thursday.

Ajay Devgan had come to Chandigarh Monday for shooting of a film.

'Paramjit (the producer) tried to put pressure on us by calling top officials of the Punjab government. He even told us that police have already issued a challan to Devgan,' a police official, who was present on the spot, told IANS on condition of anonymity.

Ajay Devgan was also fined Wednesday at Kurali in Mohali, around 35 km from here, for allegedly smoking at a railway station there.