View Profile
Both Darsheel Safary and Kareena Kapoor have one thing in common. No, not Saif Ali Khan, but Aamir Khan. Darsheel, who with his rocking performance and bucktoothed grin, won over the audiences of Taare Zameen Par, even had producer-director Aamir eating out of his hands. Aamir readily admitted defeat in all his pre-release interviews and said that Darsheel was the hero of the film.

Now, Kareena Kapoor may be on the arm of Saif Ali Khan, but admits to being a die-hard fan of another Khan, Aamir. It is another matter that Kareena went on record in her early stardom days that she would give anything to star with Shah Rukh Khan, who she claimed was a peformer without parallel.

Okay, so Aamir adores Darsheel, and Kareena adores Aamir. But this wonderful equation works out like this: Darsheel has said in his latest interview 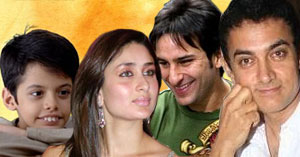 Featured Video
that he adores Kareena!

Being nominated under the Best Actor category at the Filmfare Awards, little Darsheel Safary's moving performance had him competing with four adult superstars, including Shah Rukh, whom in an earlier interview he precociously dismissed as no competition! Ask all those who have watched Taare Zameen Par which actor rules their heart and the answer is Darsheel Safary. Of course, SRK is not one to give any quarter to anyone, adult or child, and bagged the Best Actor award anyway.

In a recent television interview Darsheel candidly admitted that he was a Kareena Kapoor fan and the one thinbg he was looking forward to, after Taare Zameen Par, was to meet the vivacious actress in person at some award function.

After Darsheel, it is Kareena's turn with Aamir as she will be acting opposite the pint sized superstar in Raju Hirani's next film. Reportedly Kareena is very excited about being paired opposite the intense Khan. Kareena has worked with SRK and Salman and now Saif, too. But never with Aamir before. Her elder sister Karisma had paired magnificently with Aamir in Raja Hindustani years ago. With Raju's film, she should make a fabulous pair with Aamir.

Trade insiders are equally axcited at the prospect and are touting the Aamir-Kareena duo to be bigger than the first-time pairing of Aamir and Kajol in Fanaa. If Kajol was making a kind of comeback as numero uno, today it is Kareena who is ruling the roost. (SAMPURN)