View Profile
Vivek Oberoi nightmares dont seem to end! Who would have thought that he would be called a waiter at a party!! At Ramesh Taurani's silver anniversary it so happened that Sohail Khan didn't miss the opportunity to humiliate Vivek. ( Still badla time) 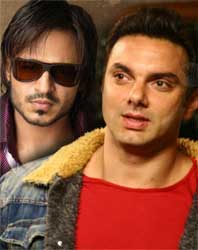 Featured Video
ays that when Sohail walked in, Vivek was busy sipping a drink and Sohail walked into the hall. A few moments later, Sohail saw Vivek standing quietly in one corner. On spotting Vivek, Sohail couldn't help but remember the enmity between Vivek and Salman and he decided to stand up for his bade bhaiya Salman. Suddenly Sohail called out 'Oye, Vivek!'. On hearing his name, Vivek looked towards Sohail.


Immediately, Sohail looked at a waiter carrying a tray of drinks and again said, 'Oye, Vivek, zaraa idhar aana'." Vivek's face fell when he realised that Sohail had humiliated him.


The shocked actor simply put his head down and walked a few paces away from where Sohail was standing.


Poor Vivek is still paying for that much publicised press conference he had called in April 2003 complaining that Salman harassed and threatened him over the phone for his relationship with Aishwarya Rai, with whom Salman was romantically involved earlier.


Our advice to Sohail, Vivek has already been humiliated enough, he has publicly apologised so why stretch it more. Let bygones be gone.