Shabana Azmi liked Vidya Balan's performance in "Kahaani" so much that she could see glimpses of herself in her. At the same time, she feels the young actress should avoid the pitfall of accepting only central parts. 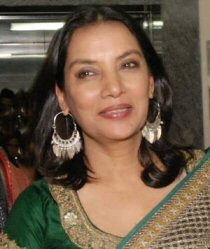 "Somewhere I feel Vidya has made the daring but right career choices. I see glimpses of my own involvement with my roles in Vidya Balan," say Shabana appreciatively after watching Balan in" Kahaani".

Shabana is currently playing a wily politician in Rajkot for Vishal Bhardwaj's "Matru Ki Bijlee Ka Mandola". She took time off from her shooting to watch Sujoy Ghosh's masterpiece that is still going houseful.

"I had to watch 'Kahaani' because of Vidya. I was bowled over by her performance. As an actor, I could see she was making all the right moves throughout the film. There was not a single artificial note in her performance," said Shabana, known for powerful performances in "Arth", "Masoom", "Fire" and "Godmother".

But Shabana sounds a note of caution in the euphoria surrounding Vidya's rise to the top.

"If she continues to dominate her films, she might very soon face a scarcity of co-stars. Heroes might be apprehensive about being paired with her," said the 61-year-old who faced that situation when films featuring her in the central role co-starred Vinod Mehra or Marc Zuber.

In "Kahaani", Vidya found the Bengali star Parambrata Chatterjee sportingly supporting her heroine-centric presence in the film. But would she run out of co-stars in her future efforts at hero-giri?

"Vidya should avoid the pitfall of only doing central parts. She should also enjoy doing peripheral parts as much as the pivotal ones. Being the centre of attention could be addictive. She must learn to also be part of a cinema that doesn't focus on her but has something important to say," suggested Shabana.