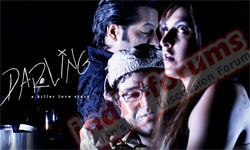 It seems director Ram Gopal Varma is keen to be different with his film music; hence he has roped in Pritam as the main composer for the soundtrack of his film 'Darling'.

And keeping in mind the kind of music Pritam composes, it is not difficult to guess what 'Darling' would be like. Himesh Reshammiya and Prasana Shekhar appear as guest composers.

Already hitting the screens and creating waves is Reshammiya's 'Tadap tadap', sung by him and Tulsi Kumar. The Tulsi-Himesh pairing works well in this song, as in earlier film songs, establishing them as a successful pair.

'Aa khushi se khudhkhushi kar le', a Pritam-composed number, has some weird lyrics by Sameer. However, the song turns out to be different in terms of composition - with peppy and Westernised music - and catches the hearer's attention. 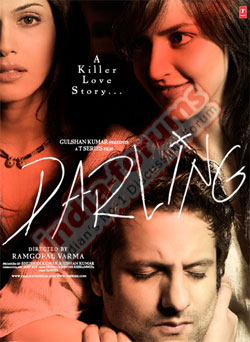 A song that deserves mention is 'Akele tanha' by Pritam, which surprisingly has Tulsi taking charge of the vocals single-handedly. The track is definitely an attempt at creating music that is completely different. Sameer's lyrics, too, take a turning point from the last song and are quite good.

Keeping in mind the theme of the film, Prasanna Shekhar has created a haunting song 'Awaaz koi'. It is possible that the number may end up being the one with which people identify 'Darling' with.

Next is a surprise in the form of a romantic number, 'Hasaye bhi rulaye bhi'. Though quite catchy, it might not have a long shelf life.

There is 'Saathiya', which is really good. It's USP lies in the Adnan Sami-Pritam combination. With Tulsi Kumar, Adnan weaves some pure magic to the track, giving it the right dose of sensuality, romance and melody. The rhythm is engrossing too.

By the end of it all, what gives 'Darling' a reason to be liked by the audience is that all tracks have something different to their credit and each starts on a completely new note.

Definitely, an album to be heard -- at least once!