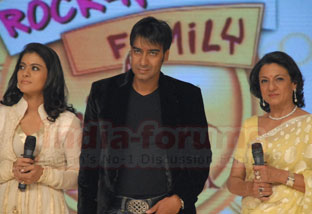 Bollywood stars are tagged to be lazy persons who are never punctual whether it’s a matter of floor or function. But Ajay Devgan, Kajol and Tanuja seem to be an exceptional case. It has been heard that the trio, who are judging the participants of Zee TV’s reality show Rock & Roll Family, always step in on their scheduled time due to which the production team is finding it hard to cope up with the over punctuality of its star judges.

“All three respected judges are always dot on time for the shoots; well before the rest of the cast and crew have got their act together. We then have to speed up the arrangements for the shoot to start quickly,” exclaims Satish Datt, director of Rock N Roll Family. The director adds, “The show requires a lot of background work like setting up the properties, camera, etc. which takes up a lot of time and cannot be avoided. It’s unbelievable that the stars patiently wait till everything gets ready.”

Ajay, Kajol and Tanuja meanwhile have found out a way to kill time. “Mr. & Mrs. Devgan along with their mom Tanuja have started dabbling in modern art on writing pads which are essentially given to rate the participants,” smiles Satish Datt.

Well, are the other Bollywood stars listening!