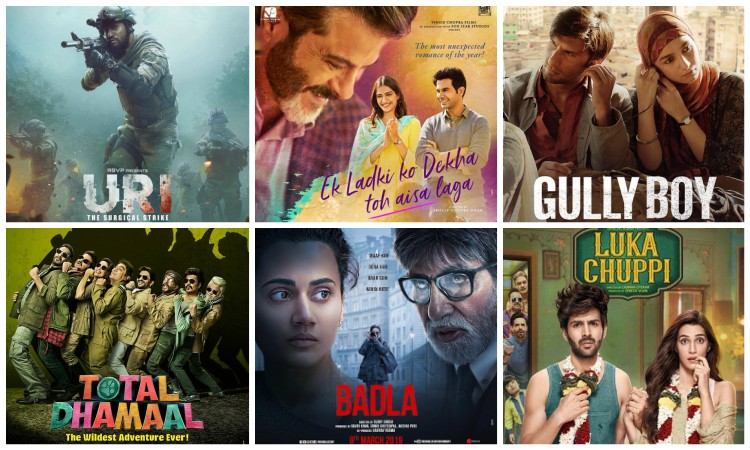 The first quarter of 2019 marks a great start for Bollywood projects with diverse content being backed by successful box office stories, and the business signaling the co-existence of big as well as small budget movies.

From rags-to-riches themes to films running high on patriotic sentiment to movies taking notes from Indian history to real life incident getting cinematic adaptation -- there was something for everyone.

"The first quarter has been very good. We have given back-to-back box office biggies... Technically, we are up by 15-20 percent in terms of box office cumulative figures vis-A-vis last quarter," film and trade expert Girish Johar told IANS.

"If the content is good, both big and small are working. It is a boon for filmmakers and boon for cinema loving people as well," Johar added.

The year started with Vicky Kaushal-starrer "URI: The Surgical Strike" tracing the real-life events of the 2016 Uri attack and its aftermath, taking the Indian box office by storm. It released on January 11. Though the film opened with the first-day box office of Rs 8 crore, it has already crossed the Rs 250-crore mark.

It was followed by the return of 'Queen' Kangana Ranaut with "Manikarnika: The Queen of Jhansi", which brought the story of Rani Laxmibai alive on the silver screen. Released on January 25, the film collected Rs 52.40 crore at the domestic box-office in five days. It has crossed the Rs 100 crore mark.

Then the box office got a new wave of energy with Ranveer Singh and Alia Bhatt in "Gully Boy", a film on street rappers of Mumbai. With the standing total of over Rs 140 crore, the Zoya Akhtar directorial, which opened on February 14, managed to mint over Rs 100 crore in the first week itself.

Actors like Ajay Devgn, Madhuri Dixit Nene, Anil Kapoor, and Boman Irani then took the audience on a fun ride with "Total Dhamaal", which has raked in over Rs 150 crore at the box office.

"We had complete 'dhamaal' through and through. When you have so much fun working on something, it shows in the final product. The joy and fun are visible on screen, and I think that's why audiences too have enjoyed the film," Anil Kapoor told IANS while talking about the success of "Total Dhamaal".

Bollywood's action star Akshay Kumar's "Kesari" is currently enjoying a golden run at the box office, with the film scoring the biggest opening weekend collection for a Bollywood film in 2019 in India by raking in Rs 78.07 crore in four days since its release on March 21.

According to trade analyst Taran Adarsh, "Kesari", based on the historic Battle of Saragarhi, will soon cross the Rs 100 crore mark in India.

The movie depicts the bravery of 21 Sikhs of the 36th Sikh Regiment (now the 4th Battalion of the Sikh Regiment) of British India defending an army post against more than 10,000 Afghan and Orakzai tribesmen.

Apart from the movie buffs falling in love with the real life-inspired stories of national heroes, audiences loved the thrill of "Badla", which featured Amitabh Bachchan and Taapsee Pannu. The film, opened on March 8, is inching close to entering the Rs 100 crore club with gross box office collection stands at Rs 90.49 crore.

As per trade guru Komal Nahta, it has been a "really nice first quarter".

"It is a continuation of what happened in 2018. All kinds of cinema are working," Nahta said.

To this, distributor Rajesh Thadani added: "It is better than the last quarter. Different contents are working."

There were some misses as well. Films like "Battalion 609", "72 Hours: Martyr Who Never Died" failed to evoke the sense of patriotism, and went unnoticed.

3 years ago Sonchiriya failed because Bollywood is full of shit and the audience don't appreciate good movies.