As a new month begins, BollyCurry brings to you another new edition of Stars: Then and Now. This time the one who has caught BollyCurry's eye is none other than Bollywood's khiladi, Akshay Kumar. Kumar is an excellent actor and a well-known stunt man in the fraternity. Let us give you a glimpse of his film journey, which started at the young age of twenty-one and now spans over twenty-six glorious years.

From a tender age, Kumar was fond of dancing and martial arts. After he obtained a black belt in Taekwondo in India, 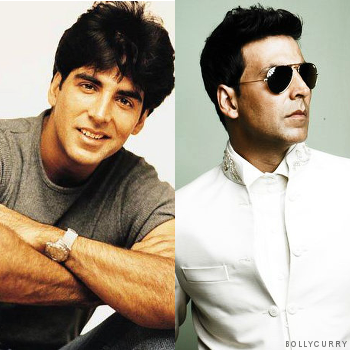 he flew out to Bangkok, Thailand to learn Muay Thai. He returned to Mumbai and started teaching martial arts, which lead him to a modelling assignment. In turn, the assignment led to him being signed for his first movie - Kumar's ticket to Bollywood.

Kumar's first film was an uncredited appearance as a martial arts instructor in Mahesh Bhatt's Aaj (1987). His first appearance in a lead role was in Saugandh (1991) with actors Rakhee Gulzar and Shanti Priya. In 1991, he did two other films Dancer and Khiladi. His role in Khiladi was considered his breakthrough role and garnered him immense appreciation. Films such as Mr. Bond (1992), Deedar (1992), Dil Ki Baazi (1993), Kayda Kanoon (1993), Waqt Hamar Hai (1993) and Sainik (1993) didn't work for Kumar and were unfortunately declared flops. His career picked up in 1994, with films like Main Khiladi Tu Anari, Mohra, Yeh Dillagi, Suhaag and Elaan. Out of these films, the first two films were declared the highest grossing films of the year, and Yeh Dillagi got him his first ever nomination for Filmfare Best Actor Award and Star Screen Award. He was undoubtedly the most successful actor of the year. In the years 1995 through 1999, Kumar had numerous successful films such as Sabse Bada Khiladi (1995), Khiladiyon Ka Khiladi (1995), Dil Toh Pagal Hai (1997) and Jaanwar (1999) which earned him numerous nominations at award functions along with commercial success at the box office.

Kumar's career graph is definitely a rollercoaster ride, but a ride that many envy. He has won many awards for numerous films and stamped himself as one of the leading actors of Tinsel Town. His upcoming films include Gabbar is Back (2015), Brother (2015) and Airlift (2016). We at BollyCurry wish our Khiladi all the best for his upcoming ventures and hope he continues to steal the audience's hearts with his spectacular performances.
Author: Nisha M.
Editors: Mohini N. and Gunia K.
Graphics: Marsh P.