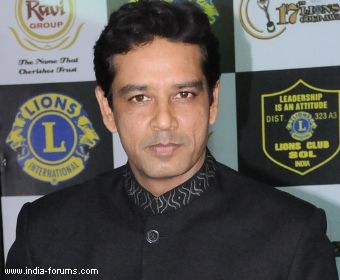 Television actor Anup Soni, an alumni of the National School of Drama, says doing theatre is more challenging than films and television.

"While doing theatre one needs to shout so that the audiences can hear you. If you forget a line, there is no cut or retake. Theatre would always be more challenging because one cannot go wrong there," said the actor.

He considers theatre as an exercise.

"Theatre is an exercise for actors because the live response that one gets from the audience helps an actor to grow," he said.

Married to actor-politician Raj Babbar's daughter Juhi Babbar, the actor is currently seen on shows "Crime Patrol: Dastak", "Comedy Circus" and "Balika Vadhu" and says it is better to experiment with your work.

"One should keep trying new roles. If you keep doing the routine, run-of-the-mill work, then no one would like to watch you. So, it is good to experiment," he said.

Muskaan92 8 years ago You are a very good host Anup Sir...
All the best for your future...

yipee 8 years ago never knew he and juhi babbar r married...love him

.Jane.. 8 years ago Oh he is in Comedy Circus as well? Never knew that. Love him in Crime Patrol and though am not a regular viewer of BV but I know he is a fabulous actor well.
And yes of course theatre is any day tougher than television and films and unlike the latter two, one cannot survive there just with a pretty face. You actually need the SKILLS! (: