Bollywood is called the mirror of the Indian society where every movie character reflects the behavioural traits found in Indians. Even then, Bollywood has time and again seen portrayals of female characters that are sketchy and which see no development whatsoever throughout the movie. The women onscreen are brainless beauties, lacking substance and are always dressed exceptionally well. But then, so are the mannequins in any retail store, right? Does appearing giggly and clueless make them beautiful just as stripping to the waist makes a hero invulnerable? Today, we at BollyCurry will leaf through the irritating portrayals of women in Bollywood, who constantly (albeit inadvertently) drive the hero along with the viewers, up the wall.
The Shy Silent Spineless Doormats 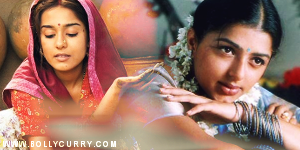 One particular character we stumble across often is the typical milksop heroine with no self-respect, no opinions and a backbone that has the durability of a threadbare dishrag. Be it Bhumika Chawla in Tere Naam who is so soft spoken, literally, that one starts questioning their own hearing ability or Amrita Rao in Welcome to Sajjanpur who is so incredibly boring that she makes a dry leaf look exciting. These eternal can't-possibly-do-anything for-themselves, damsel in distress leave no stone unturned to feed the egos of several male chauvinists and leave the independent women seething with frustration.
The Clueless Simpering Miss 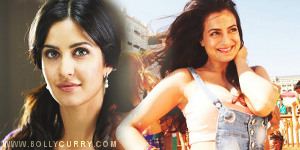 Every time you watch a horror movie where the heroine leaves the warmth and safety of her own house, because of some unknown spooky noise in the backyard and goes hollering "Kaun Hai Wahaan?", you are left with jaws clenched and teeth gritted as yet another heroine follows the tradition of unthinking idiocy. Such dim-witted characters that seem to have donated their unused brains to science grace the screen with their presence in numerous movies. Once such portrayal is of Ameesha Patel in Race 2 who is a giggly dumber-than-rocks' assistant who despite of her colouring, would have been an inspiration for several dumb blonde jokes. Katrina Kaif in De Dana Dan is about as clueless as a dodo and makes as much sense as a waterproof towel. Suffice to say, if brains were footwear, these characters would never own a pair!
The Insecure Dubious Housewives 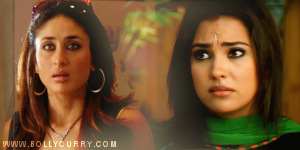 Another character of extreme heroine ignorance is of the insecure housewives who treat every move of their husband with an eye of suspicion. Kareena Kapoor in Golmaal Returns has an imagination that runs wilder than a string-less kite and a tendency to draw ridiculous conclusions with no evidence, while completely missing the point that her insecurities can throw her husband off women altogether. Lara Dutta in No Entry fancies herself in the shoes of Nancy Drew trying to solve the mystery of "who is my husband meeting once my back is turned?". These characters have the potential of making one dash to the nearest chemist for headache medication if they don't succeed in their well-planned tickling of a few ribs.
The Dutiful Missus 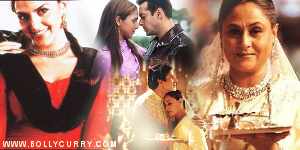 The characterization of the holier-than-thou wife who blindly follows her husband without questioning his decision in morally ambiguous situations is so overused that it has become mind numbingly tedious. Jaya Bachchan in Kabhi Khushi Kabhie Gham portrays a role of a woman who has the loyalty and obedience of Goddess Sita and Mandodari combined, in addition to a martyr complex so big that it is visible from mars. Esha Deol in No Entry is portrayed to be so devoted that she greets her husband with open arms and a welcome home cookie even though his shirt reeks of female perfume. Tara Sharma in Masti is not any less since she washes her not-so-loyal husband's feet with milk each morning. These goody two shoes fill one with a sense of ennui, so deep, that they have the tendency to strike the wrong nerve in the worst way possible.
The Naive Unworldly Beauty 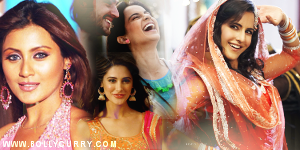 Their worldly knowledge is so scarce that they might have been extra-terrestrial beings from outer space. If we were to have a shot of alcohol every time we stumbled across a naive heroine in Bollywood over the years, we would have had a liver failure by now. Naivete is an endearing quality if it is present in the right proportion. Kangana Ranaut's innocence in Queen touches the heart in the 'oh-so-adorable' way because despite of her naivete she shows flashes of good sense and spunk. The same cannot be said for Rimi Sen in Deewane Huye Paagal who is outpaced by Sponge Bob in the brains department and whose supposed innocence crosses the thin line between being totally unworldly and downright foolish. Katrina Kaif in Tees Maar Khan and Nargis Fakhri in Main Tera Hero are others who join the list of such stereotypes who sometimes bring out indulgent smiles when they don't annoy the living daylights out of viewers.
Indian cinema has kept millions enamoured since its genesis and the perfectly etched characters have lived on in the hearts for years. Characters drawn not merely to portray, but to evoke, to forge a connection with the audience. Bollywood needs more than portrayals of women that leave the audience shaking their heads in disbelief and wanting to hit something in the vicinity. It needs female characters that have the facets of serenity, strength, vulnerability and elegance along with a combination of wit and sarcasm, rather than leaving them like a piece of decoration for the film. It needs stories where humour is more than witless antics that make the plot line an incoherent mess. With this, BollyCurry bids adieu, thereby requesting you to let us know which of these women left you grinding your teeth and rolling your eyes for the umpteenth time, in our comment box below.
Author: Aditi P.
Editor(s): Saraa K. and Sonia R.
Graphics:  Marsh P.