Mumbai, May 8 (IANS) The backlash against his directorial debut 'Tashan' notwithstanding, director Vijay Krishna Acharya is set to direct his next film and wants to show critics that his convictions as a filmmaker are intact.

'Yes, I'm going to be directing my next film sooner than I had thought. While I'll be helping out my mentor Mani Ratnam with his new project, I'll simultaneously work on my own film,' Acharya, better known as Victor, told IANS.

'It's very important for me to direct another film and let my critics know that my convictions as a filmmaker remain unshaken. Though it'll be nothing like 'Tashan', my next film too will be as whimsical. It's always going to be my way,' he added. 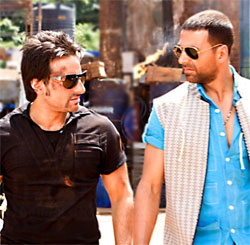 Featured Video
t get favourable reviews at the box office.

Acharya ponders over the fate of Tashan and says: 'I didn't know I had made the worst film on this planet. A lot of the venom was directed at my producer, for whatever reasons. But I'm happy to say in spite of 'Tashan' not opening at multiplexes, it has collected almost as much as Yash Raj Films' 'Fanaa'. And that is saying a lot.'

And, yes, Yash Raj Films is not backing out of Acharya's next.

'I'm thankful for their belief in me. I don't think any one of us feels I made the wrong film. Now that 'Tashan' has opened in multiplexes, we're hoping to tilt the imbalance in the performance level.'

He is slightly taken aback by Saif's accusation that a lot of his role in 'Tashan' was cut on the editing table. However, the truth is only one big sequence of Saif had to be cut.

'Yes, certain scenes had to be cut. But I don't think any actor is especially unhappy about a normal procedure like editing to tighten a film.

'In fact, Akshay Kumar, filmmaker Nikhil Advani who's a friend, and the rest of the unit of 'Chandni Chowk To China', saw the film in Bangkok the other day. They loved it,' he added.