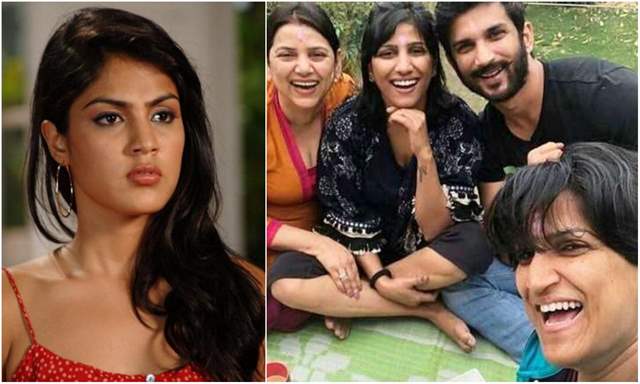 On Tuesday, the judicial custody of Rhea Chakraborty and Showik Chakraborty was extended for two weeks, upto October 6 2020. In response, the actress' legal team filed for a bail plea in the Bombay High Court.

The bail plea was scheduled to be heard today but now stands postponed to tomorrow, 24 September due to heavy rains in Mumbai city.

In her application for bail, filed by her lawyer Satish Manshinde, Rhea has said that she has been subjected to a "witch-hunt".

As reported by Times of India, the Jalebi actress has made a set of fresh revelations and allegations against Sushant Singh Rajput's family.

1. In her bail plea, Rhea stated that Sushant wanted to document his daily life as he wanted to change people's perception of him. She shared how the actor's roommate and friend Siddharth Pithani took various videos of them together and also joined Sushant in his daily prayers.

2. According to Rhea, Sushant was inspired by the American TV show 'Entourage' and liked the concept of having an entourag. The actress claims that since Sushant was distant from his family, he liked living with his friends. Sushant resided at Capri Heights, Bandra in a duplex apartment with his friends Aayush Sharma, Siddharth Pithani, Sam, Himanshu as well as his sister Priyanka and her husband Siddharth.

She adds that Sushant liked helping his friends from small towns who wanted to make big in Mumbai.

3. In a serious claim, Rhea says that Sushant felt that his sisters were after his money.

To recall, the actress shares that Sushant tried to contact his sisters several times to inform them about his alleged depression along with other issues. In third week of November 2019, his three sisters came to Mumbai and informed him that they would be taking him to Chandigarh for further treatment, says Rhea. However, Rhea claims that on 26th November 2019, Sushant called her to inform  that he would not be travelling to Chandigarh with his sisters as he felt that they were merely after his money.

4. Rhea recalls the time when in January 2020, Sushant allegedly asked her to leave and go back to her house as he planned to move to Pawna.  According to Rhea, Sushant had also informed Rumy Jaffrey about his inability to do his movie as he wanted to quit acting and do farming in Pawna.

However on January 10, 2020,  Sushant called Rhea back and informed her that he had watched Jim Carrey's journey about depression and was feeling inspired to fight his own battle, claims Rhea.

6. According to Rhea Chakraborty, Sushant could hear his late mother's voice when no one was around and informed her about the same in June 2020.

Rhea has made the above mentioned revelations in her bail plea, which will be heard tomorrow, on September 24 2020.

Rein123 2 months ago @basherz we can judge for ourselves, we don’t need yours or anyone else’s permission to make a judgement over who is telling the truth and who is lying, my right to free speech allows me to state my opinion and beliefs based on whatever has been reported and the evidence out in the public domain, who the hell are you to try and stop me? I don’t need to be a judge for that, every person has the right to decide for themselves. The people who want to believe her can do so, but even we know who those people really are other than her paid PR agents like you. So yes other than her hired PR idiots no sane person would believe a word she utters. As far as SSR’s family is concerned, they are the ones who demanded the CBI investigation while Rhea Tai the drug peddler wanted the case to be retained by Mumbai police and tried very hard to prevent it from it shifting to a central agency. That alone is enough for me decide who is being truthful and who is a liar. We don’t need permission from paid PR agents like you to decide that.

illa8 2 months ago this is the fakest thing i have ever read!

Rein123 2 months ago Common tactics used by criminals on the instructions of their lawyers. Unfortunately for only a few idiots out there would believe her.

Bharathi_gurti 2 months ago This women is disgrace to the female gender..she deserves only one thing👠👠👠👠...such a lowlife...

priya185 2 months ago This Rhea is only speaking negatively about people. At least she should not tarnish Sushant’s name after his unfortunate death