View Profile
On one hand industry witnesses some of the most hyped films fall like nine pins at the box office on their release. There have been instances when no amount of buzz, hype or promotion has saved a film from being rejected by the audience.

On the other hand a surprise or two is always round the corner when there aren't many expectations from a film, courtesy near to nil publicity, lack of big names in the star cast or a dated feel. Still, these films turn out to be a success. Khosla Ka Ghosla, Bheja Fry, Mithya, Shaurya or Khuda Kay Liye are just few of the examples of such recent box office successes.

Now, as the industry looks forward to what's in store in the second half of the year, Mehbooba appears to be throwing a surprise at the box office. Dated by almost a decade, the film has seen a reasonable opening at the carefully selected centers where it has been released. 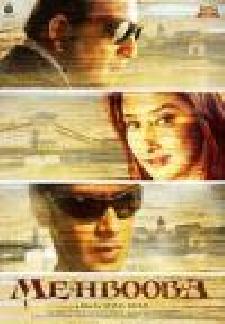 
Since the film's subject (a love triangle), treatment and music is the kind that worked only a decade back and has precious little to offer for the urban centers which are loving their dose of Jaane Tu Ya Jaane Naa, this Sanjay Dutt, Ajay Devgan and Manisha Koirala film has primarily seen a single screen release and that, too, mainly in the interiors of North India.

A point to be noted is that the film has garnered mostly negative reviews all over. However, would this really impact the progress of Mehbooba over the week? Not really! And that's because the segment of audience which is watching the film isn't cued into the dozens of reviews that are spread all over the internet. For them, it is the staple diet of two heroes, one heroine, some great sets/locations and number of melodic songs (by Ismail Darbar) which matters most.

Well, the strategy seems to have paid as the audience out there has given a Thumbs-Up to the film, hence resulting in a satisfying weekend. Made on a lavish scale, this Afzal Khan film does boast of Sanju baba as the prime attraction which has managed to attract audience to theaters. Though it is still too early to call the film as safe, a decent opening has won at least half the battle for those who have invested in the film.