As you turn the page of your diary from July to the glorious month of August, our calendar reverts back; rapidly flipping pages to another August forty years ago, where a talented actress of Bollywood, Kajol Mukherjee Devgn, celebrated her first birthday. From the baby steps of growth to the giant leaps of success, we at BollyCurry will cast a light on the cine journey of this amazing actress through our latest edition of Stars: Then and Now.
Hailing from a long line of actresses, Kajol kept the legacy alive by stepping onto the silver screen at a tender age of 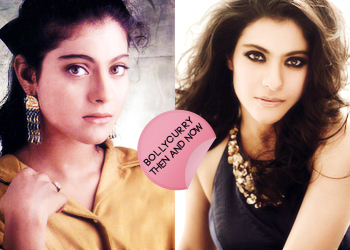 seventeen with Rahul Rawail's film Bekhudi (1992). Though the movie was a commercial failure, Kajol's talent as an actress was recognised and soon she was offered the lead role in the film Baazigar (1993). The movie ended up being her first stepping stone to success in the world of Bollywood.
Kajol was then nominated for the Filmfare Best Actress Award for Yeh Dillagi (1994). But it was the award breaking Dilwale Dulhania Le Jeyenge (1995) that not only went on to be the highest grosser and longest running film in the Indian cinema's history but also earned Kajol her first Filmfare Best Actor Award.
Taking a bold step on an unthreaded path, Kajol played the role of an antagonist in Gupt (1997) and once again, the actress proved her mettle by earning a Filmfare Award for the portrayal of a villainous character. The year 1998 saw her in a lead role of three successive hit films Pyaar To Hona Hi Tha, Pyaar Kiya To Darna Kya and Dushman. Her biggest success was Karan Johar's directorial debut, Kuch Kuch Hota Hai (1998) which emerged as a blockbuster worldwide. Thereafter, Kajol has starred in numerous movies including Dil Kya Kare (1999), Hum Aapke Dil Mein Rehte Hain (1999), Raju Chacha (2000), Kabhi Khushi Kabhie Gham (2001), Fanaa (2006), My Name Is Khan (2010) and cameos in various other movies.
The beautiful actress is married to actor Ajay Devgn and she is the mother of two children, Nysa and Yug. Kajol has devoted a great amount of time to her children's upbringing and her family life. During this period of being an ideal wife and mother, Kajol has taken various social works under her wing. These include Shiksha, an NGO that encourages children's education, The Loomba Trust, an organization that supports widows and their children, Cancer Patients Aid Association and Pratham, a charity organization for children.
Over the years, her hard work and dedication outside and inside of the industry were acknowledged and thus, she was awarded with the Karamveer Puraskaar Award in 2008 and the Padmi Shri Award in 2011 for her contribution respectively.
Creating the perfect balance between her career, personal and family life, Kajol embodies everything a woman ought to be. She is all set to make her fans swoon once again by teaming up with her all time favourite co-star, Shah Rukh Khan for Rohit Shetty's Dilwale. The movie is slated to be released on December 18th, 2015.
From a spunky tomboy with a bouncy bob in Kuch Kuch Hota Hai to the serene blind beauty in Fanaa, Kajol has proved her determination over and over again in her all her films. She has not only set a benchmark with her fabulous acting but also walked on unpaved paths and left a trail. We at BollyCurry wish her all the success and hope that she continues stealing breaths and hearts in the years to come.
Writer: Aditi P.
Editors: Shikha A. and Mohini N.
Graphics: Shikha A.
Have a suggestion or comment for BollyCurry? Then drop us a PM at BC_Dropbox today!

BabyHimavari 5 years ago One of my most favorite actress who proves looks doesn't matter in front of mettle and talent. Hats of to this lady,