BollyCurry introduces a brand new column for its readers - Then & Now, an article featuring those who started their filmy career as child actors and have now returned as adults. The very first one caught it the webs of Then & Now is none other than the extremely energetic, Sana Saeed!
Born to a Muslim family in Mumbai, Sana Saeed Khan debuted in Bollywood at the tender age of ten with one of Karan Johar's most appreciated and remembered film, 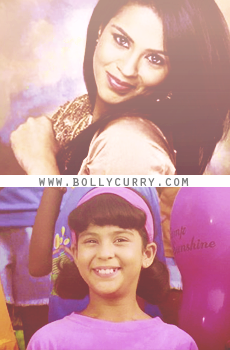 Kuch Kuch Hota Hai, playing the role of Anjali, Rahul's (Shah Rukh Khan) daughter. She portrayed a pivotal role of ensuring Rahul reunited with his college-love Anjali (Kajol), on the request of her late mother, Tina (Rani Mukherjee). The film won Saeed a Sansui Viewers Choice Award for Best Child Actress. Her career then went on to see her playing roles in movies such as Badal and Har Dil Jo Pyaar Karega in the year 2000.
Subsequently, Saeed took a break from the world of Bollywood to focus on her studies. She returned in 2008 for television shows such as Fox Kids and Babul Ka Aangann Chootey Na. She also played the lead role of Pooja in SAB Tv's show, Lo Ho Gayi Pooja Iss Ghar Ki.
In 2012, Saeed resumed her previous Bollywood rise with her pairing once again with Karan Johar in the movie Student of the Year. Starring opposite three new comers as Tanya Israni - the haughty character that loved Rohan (Varun Dhawan) and left no chance to humiliate Shanaya (Alia Bhatt), she played a glamorous cheerleader and left the audience reminiscing her superb acting skills.
Returning to television industry, Saeed entered as a wild card participant in the reality show Jhalak Dikhla Jaa (season 6) with partner Tushar Kalia, exiting the platform in 6th position and numerously praised for her energy level and love for dance. During her time on the stage, it was evident and often demonstrated just how much Karan Johar had a parental soft corner for her in his heart, mostly from witnessing her grow up before his very eyes. Post this dancing stint, Saeed hosted the review show for MTV Splitsvilla 6 "Sexy Sana'.
Interesting facts:
It is quite evident that this sexy lass is here to prosper further in the industry, given her talent in dancing and acting, bagging numerous shows and movies. BollyCurry wishes Sana the very best for her future and hopes to see her again onscreen very soon!
Writer: Khushi P.
Editor(s): Fariha L. and Jenifer Y.
Graphics: Aanchal V.