Everybody had been waiting for this moment, to see the Badshah SRK and Farhan Akhtar get together on screen and create magic!! 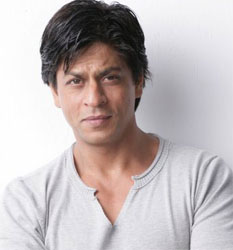 Featured Video
Yes, the wait is finally over as the King Khan of Bollywood, Shah Rukh Khan will be seen in the hot seat as guest this weekend on Oye It’s Friday on NDTV Imagine. It is heard that the duo got into high-entertainment mode and had a gala time as they shot for the episode.

“The two share a great rapport from the time they worked together for Don. The duo met at Yashraj Studio during the promo shoot of Oye It’s Friday recently, and chatted away at lunch time,” says our khabroo.

“It seems Farhan then invited SRK to grace his show as guest, and King Khan readily agreed”, adds the source.

He was supposed to come for the first episode. “Yes, but as SRK was busy with Rab Ne Bana Di Jodi, he could not give enough time for the shoot. Thus the channel decided to have Hrithik instead. The shoot with SRK was completed long back, but the channel for waiting for the right time to air the episode, as it is slated to be one of the best episodes of Oye till date,” quips the source.

The episode will be aired this weekend, on 16th January at 10 PM.

So viewers, get ready for full on masti with host Farhan and his special guest SRK as they say in style, OYE IT’S FRIDAY…

13 years ago Ok with SRK there...I know its going to be entertaining and worth a watch :)

+ 5
13 years ago awesome will download it! definitely coz my sweety is there. lolz

+ 4
13 years ago oh my GOD !!!! i am going crazy out of my happiness ,MY SRK coming to the show ,thanks a bunch imagine ppl ,
yipheeeeeeeeeeeee ,yeheeeeeeeeeeeeeeeeee ,i am dancing !!!!!
i just love all the interviews of my SRK !!! he is is just an angel !!!!

SRK looking forward to ur interview !!!!!

13 years ago I dont get this channel..couldn''t find this prog on NDTV Imagine in this forum as well..can somebody pls look into it :-)