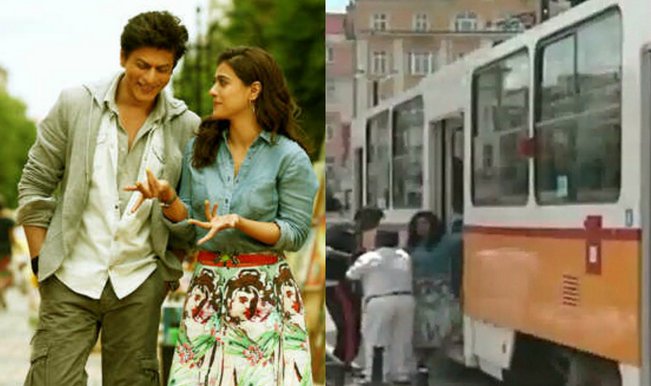 A photograph of the scene was shared on micro-blogging website Twitter by the "Badshah" of Bollywood himself. He also thanked the crew for the photoshoot.

"Got myself a hat & Kajol a malmal (cloth) to thank Rohit & Team for an awesome shoot & checked if the magic continues," SRK tweeted on Wednesday night.

Kajol and SRK's on screen pairing has been a hit. Their chemistry in films like "Baazigar", "Karan Arjun", "Kuch Kuch Hota Hai", "Kabhie Khushi Kabhi Gham" and "My Name Is Khan" has been widely lauded.

The iconic Bollywood couple will next be seen in the December 18 release "Dilwale", which also features actor Varun Dhawan, Kriti Sanon, Boman Irani and Vinod Khanna among others.

5 years ago When will this wait come to an end??
3 more months! Too long, cant wait!
God bless them :)