View Profile
There is NO Mr Walia in Kyunki... 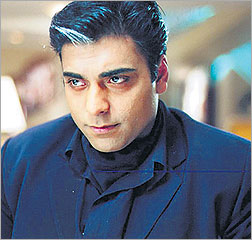 Featured Video
Rumors are doing regular rounds that a popular actor will soon be introduced in Kyunki. A reputed tabloid had reported that the new mystery man in Kyunki is none other than Ram Kapoor popularly known as Jai Walia.

Our correspondent Minnie got in touch with the man himself. Rubbishing the rumour outright, Ram said “There is no truth in it. I have not been contacted by Balaji, and even I came to know about it after reading in the papers. I am not playing any cameo in Kyunki. These rumors are baseless.” The actor is currently shooting in Turkey for his popular serial Kasamh Se in Zee.
Recently, Gautami Kapoor, wife of Ram Kapoor, has been roped in as new Tulsi in the serial. The couple was last seen together in Balaji Production Ghar Ek Mandir years ago where their onscreen and off-screen chemistry was much talked about. They later got married and recently had a daughter.

One wonders why a lead character will play a cameo in another serial. But in the serials of Ekta nothing is impossible. But for now there is no Mr Walia in Kyunki.

15 years ago I think he should stuck to Kasamh Se coz he is suit to this drama, not Kyunki. I can't image him in it.

15 years ago Was hoping to see him and Gautami together in Kyunki!!
Never mind
Thanks 4 the Artical!!

15 years ago dipika you are stupied you are my friend

15 years ago Thank goodness there is no jai walia in kyunki beacuse i am tired of him in kasam se. His character is so annoying like, I don't like.

15 years ago thank you pooja to saying my personal things on the formus!!!!!!!!!!!!!!
i am not happy with you i will see you in school watch what i am goona do with you

+ 2
15 years ago it,s a rumour. it would have been really nice to see jai and gautami agin onscreen

15 years ago thanx fir sharing, it wud have been cool to see him with Gautami though!!!