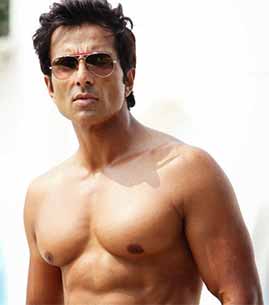 Sonu Sood, who has dubbed for the Hindi version of Hollywood film "The Legend of Hercules", wants to lend his voice for action star Sylvester Stallone.

"I have always been a huge fan of Sylvester Stallone. His films left an impression on me and I started exercising after seeing him. I would love to dub any of his films," the 41-year-old told reporters here Saturday.

There were reports that earlier Akshay Kumar was approached to dub for the film.

When asked about it, Sonu said, "I had also heard this. But Akshay is family and we have recently shot 'It's Entertainment' together. He is like an elder brother.

Sonu was last seen in "R...Rajkumar" and is currently shooting for Farah Khan's "Happy New Year".