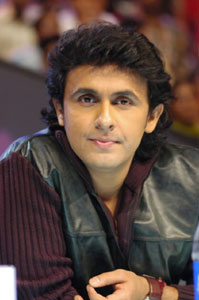 After going public about being harassed by a gay scribe, Sonu Nigam seems to be at ease now. Enjoying the joys of being a first time father, Sonu and his wife are in USA at the moment.

But he is making an exception from being with his child for the contestants of Indian Idol (Sony). Apparently, he is so thrilled with the talent he has seen on the show that he is coming to Mumbai next week to be a celebrity guest at the show.

Having been a judge in the earlier seasons of Idol, he had refused from being a part of it this time because of his earlier commitments of tours in the US and the birth of his child, which also took place in the States.

He says, "I expressed my keenness to the organizers and the channel that I wish to be part of the talent hunt contest and they've agreed. The talent this year is exceptional. I'll be flying down next week to make a special appearance." Sony also has very high viewership in the States. Maybe that explains why the singer is going out of his way.

14 years ago what he became father. didn't he get divorce from her?

sourabhbhavsar 14 years ago haha harassed by a gay? it would not had been a big news if it was a girl. lolz.

finally, sonu will give the right comments to the II contestants!

14 years ago heheh..looks like all Indians like having their babies on American soil..Sonu Nigam ji being no exception..lols:)
YO GOT ONE GREEN CARD IN THE FAMILY!

14 years ago Thats would be so nice. they should have called him since day one of Indian Idol 3 perhaps its not too late either.