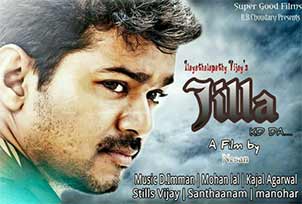 qqTwo of the highly anticipated Tamil albums "Jilla" and "Veeram" of superstars Vijay and Ajith Kumar respectively, will have a soft audio launch, according to their makers who have decided not to go for grand release.

The soundtrack of "Veeram" will be released Friday on a radio channel in the presence of its director Siva and composer Devi Sri Prasad.

"Ajith sir usually prefers soft launches over a lavish one, and therefore, he insisted that we have a soft launch for our film. Moreover, we are confident about the music and strongly believe that it will be well received," film's director Siva told IANS.

Ajith usually likes to stay out of limelight and seldom promotes his films.

"We are extremely busy with the post-production work and since we have already locked the release date, we wanted to ensure everything wrapped up on time. Therefore, we have decided not to have a grand audio launch," the film's director Nesan told IANS.

Nesan added that what matters finally is the music.

"If the music is good then it will automatically be received well. We don't have to necessarily promote it in the market. I think the music of our film won't disappoint fans," he said.

D. Imman has composed the music for "Jilla".

Both the films are slated to battle it out at the box office next year.

Sushant Singh Rajput case: NO clean chit given to Bollywood ...
20 minutes ago

Bigg Boss 14: Abhinav Shukla and Rubina Dilaik to be a part ...
56 minutes ago