View Profile
It is a known fact that the Bachchans and the Khers have a very cordial bonding and that the young blood of both families, Abhishek and Sikandar are thick friends. Knowing all this, it certainly was no surprise that the 'Bahu' of Bachchan household, Aishwarya Rai Bachchan took centre stage at the party organized to celebrate the debut of Sikandar in Bollywood with 'Summer 2007'..

She took it upon herself to introduce the new star-son to the media gathered at the party and in total 'Filmy Ishtyle', the talent of tomorrow Sikandar came into the limelight amidst a dark patch of smokeVeteran direct 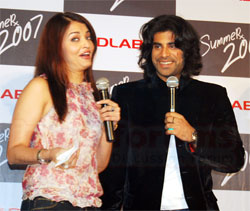 Featured Video
ors, Sudhir Mishra and Satish Kaushik were also present to wish Sikandar the best of luck for his future endeavors.

All eyes were on the promo stills shown in the party wherein glimpses of Sikandar's acting talent came to the fore. Talking of Sikandar, the gorgeous actress remarked, "I know Sikku as a person since a long time, but I really felt nice to see him as an actor, he is full of energy. It was good to see that he has been successful in transforming the same kind of energy in his reel life too".

Narrating her first experience with Sikandar on the sets of Sanjay Leela Bhansali's Devdas, Ash says, "Sikku was employed as Sanjay's assistant director in Devdas. I felt him to be a hard working, clean hearted and sincere guy. But the day I started knowing him personally, I realized that along with all these qualities he is professional too".

As the Kher family pins their hopes on Sikandar, it is no different for the Bachchans as well. Talking on behalf of them, Ash opines, "I am happy to find Sikku entering the world of Bollywood. But now onwards he would have to really work much harder to earn the fame". The Diva giving out Abhishek's part of the speech too said, "Abhishek has even told Sikku that he would stand alongside him so that he doesn't have to face the problems which a newcomer does in this industry. Sikku has got acting in his blood as his parents Anupam and Kiran are proven versatile actors". Stating the reason for the conspicuous absence of the rest of the Bachchan family, Ash said that they were busy with prior commitments and were not able to be here at the function.

May the Grace of his parents and the Bachchan household make Sikandar the true 'Sikandar of Bollywood'!!