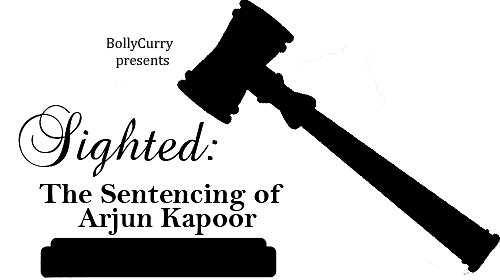 Making a style statement and making a style faux pas are entirely two different ideas. In this month's Sighted article, BollyCurry's Fashion Police has caught Tinsel Town's Arjun Kapoor committing a felony other than stealing hearts. Unfortunately, this happens to be an indictable offence and we are left with no choice but to sentence the lad to an entire article of humiliation, though he does redeem himself once. The offence being, abominable wardrobe choices. 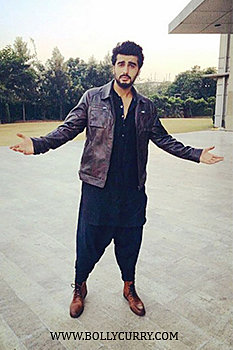 Kapoor was sighted in City Beautiful (Chandigarh, Punjab), in an outfit that is not so beautiful. The Tevar (2015) starring charmer donned a black kurta with matching dhoti pants. He topped off the look with a brown leather jacket and brown laced boots. Either Kapoor has found it difficult to step out of his role in Gunday, or his cousin turned personal stylist , Rhea Kapoor, has been heavily inspired by Ranveer Singh's quirky fashion statements. Fortunately for Singh, he can pull it off, but unfortunately for the lad in the spotlight, he can't. When in doubt, a leather jacket and boots complement a pair of jeans and a t-shirt much better than a dhoti. Less is more, Kapoor, less is more. Rating: 1.5/5 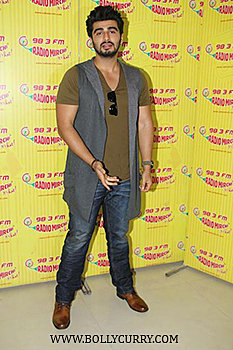 Later on, the actor posed for cameras in Mumbai at the Radio Mirchi studio alongside with Tevar co-star Sonakshi Sinha. This time, he sported a dark evergreen shirt with a pair of blue jeans - thank the Lord. Although the shoes are done just right, the overall look was disturbed with a grey sleeveless overcoat - damn his formidable fashion sense to hell. What happened to a good ol' full sleeved shirt topped with a sleeveless waist coat? Perhaps, the brown leather jacket from the first outing could have been put to good use in this questionable attire. If only the handsome bearded face could divert attention from this disastrous combo! Rating: 2.5/5 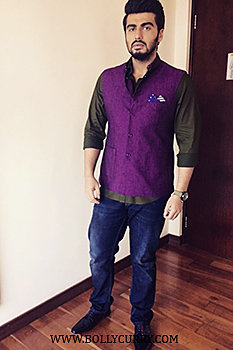 Arjun Kapoor also made a quick pit stop in Ahmedabad with this ensemble which allows us to take a mild breath of relief. While he tread safer charted territory with this outfit, the black Tommy Hilfiger shirt topped with the purple Raghvendra jacket clash in a distasteful manner though we do like the complementing colours. We do however, approve of the dark blue jeans, and the striped Lacquer Embassy pocket square. While the rolled up sleeves and a watch on the wrist gain him brownie points, the mediocre shoes adorning his feet take them away. A lighter colour in the jacket and an appealing pair of shoes could have sealed the deal with this one. Unfortunately, 'close enough' doesn't work for us. Rating: 3.5/5 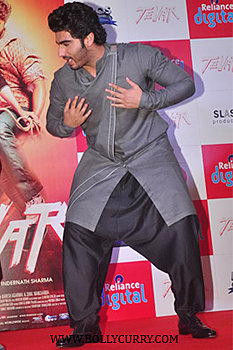 Back in the city of Mumbai, Kapoor stepped out of the 'close enough' line and into the 'not anywhere close'. This time with the dhoti, he opted for a draped kurta by Antar Agni. Unless he was dressing himself for 'who wears a curtain best' competition, the attempt at a somewhat of a traditional-modern fusion went down the drain. Unfortunately, looking at the attire for much longer sets our fashion driven hearts into an unhealthy spiral; hence, the lack of a better description of the abhorrent outfit. Rating: 1/5 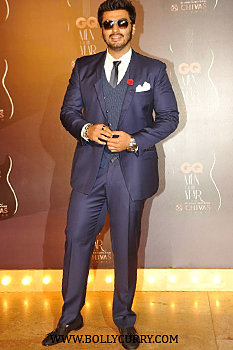 With all due respect, Arjun Kapoor, the knowledge of your previously 'chubby' past is not hidden. To further remind your viewers on a constant basis, is pointless. A suit tailored to fit a man like a second skin is a suit to be admired. A suit tailored to fit a man to make him seem flabby is to be set on fire - and never be seen again. Unfortunately, this lad seems to miss the memo every time a suit is thrown on. If a suit worn wrong isn't worth a life sentence, those pair of shades sure are. Rating: 2/5

We can sure be glad that the brilliant actor's career choices are not as despicable as his wardrobe choices, otherwise 'downfall', thy name is Arjun Kapoor. A repeated hairstyle makes matter only worse. If anything, the man is in a desperate need of a haircut and an unbiased personal stylist who is not his cousin. Be still my rapidly beating heart, even when buried deep down, a diamond shines. We will wait for this man's shining moment to arrive. Until then, a coffee break is long overdue.